May we present the BSOD on Wheels 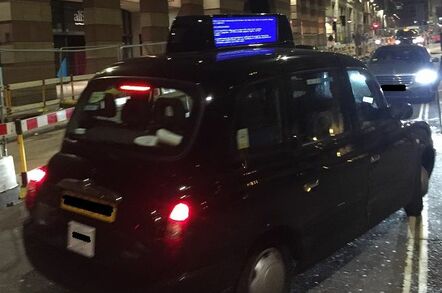 Bork!Bork!Bork! Welcome to another instalment in The Register's irregular look at tech behaving badly in public. Today we present Bork on Wheels.

A beloved sight on London's streets, the black cab has been through several iterations over the years and this incarnation has brought forth that very special Blue Screen of Death: the BSOD on the go.

Spotted by Register reader Alastair Craft, the borkage came on suddenly: "One moment it was displaying some marketing fluff, the next BSOD."

London's black cabs have sought to supplement their meagre income through advertising, sometimes via decoration on the vehicle itself, other times via displays on the roof. After all, there is a considerable hole to fill, caused in part by drivers' amazing ability to ignore sodden would-be passengers. And heck, suspension that bad won't pay for itself.

Craft bravely engaged the driver in conversation and was told the borkage was a regular occurrence on rainy days. "I guess a different sort of leaky Windows," he observed. He didn't mention if the driver then engaged in the usual opinion-flinging so beloved of the trade.

It could well be that yet another tirade regarding Jeremy Corbyn, Boris Johnson, Uber or the biggest black cab bogeyman of them all – cyclists – was just too much for the edition of Windows stuck on the roof, and Microsoft's finest opted to end it all.

"'Ere, I had that Satya Nadella in the back of me cab once. Lovely fella; kept talking about manure – or was it Azure – know wot I mean?

Maybe don't put Windows on top of a taxi. How about that? ®