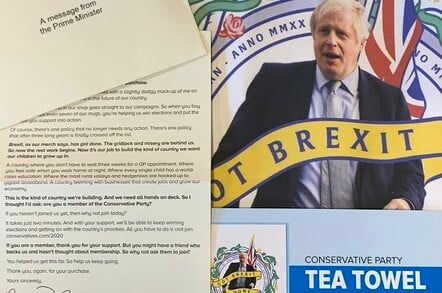 The Register's very own "Got Brexit Done" tea towel finally arrived this week and brought with it important news for Blighty's hedge dwellers.

We at El Reg love a tortured metaphor as much as the next Leading Global Online Tech Publication and having accidentally ordered a tea towel while researching a piece on Brexit merchandising, the fact it arrived even later than promised was like manna from heaven.

The fabric depicts the current (at time of writing) UK prime minister striding purposely forward, surrounded by the expected national symbols, and some drawings of vegetation which, frankly, look like a class of pre-schoolers were left alone with the crayons for a little too long.

We've yet to extract it from its packaging for fear of damaging its future value. After all, it must be worth at least three or four euros.

However, an unexpected bonus was an envelope with the words "A message from the Prime Minister" printed on it.

We tore into it excitedly. What might it contain? Perhaps an apology for, well, everything? A peerage for your hardworking vulture? Maybe it was a horcrux containing a wafer-thin portion of <insert current political bogeyman or woman here>'s soul?

Sadly, it was just a letter from Johnson thanking us for buying "a share in the future of our country" via a "tea towel with a dodgy mock-up of me on it". Oh, the UK's PM can be a wag, although we're pretty sure that it's a photo and not a mock-up.

As well as an exhortation to join the UK's Conservative Party (we are strictly apolitical here at El Reg), there was also a curious promise standing out from the guffery. Something related to the rollout of rural broadband.

Click to enlarge for your daily quota of guff

Since when did a hedgerow need gigabit broadband?

Certainly the things are teeming with wildlife such as birds, dormice and, of course, hedgehogs. While we've not conducted a scientific survey, we suspect that none would react well to a fibre up the wazoo and Netflix on demand.

Naturally, we contacted Conservative HQ to learn more and will let you know if it responds. We also checked if OpenReach has any plans and asked the Countryside Alliance if it was aware of Johnson's latest Big Idea.

In the meantime, we're going to pop the tea towel into the WeWork bathroom at Vulture Central and sit back while the man-bunned masses lose their minds. Hand towels were removed recently and replaced by a single hand dryer with all the effectiveness of an elderly asthmatic.