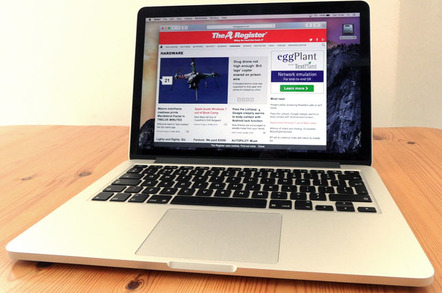 For years, Apple has been said to be working on its own in-house Arm architecture to replace Chipzilla's silicon. And, while nothing is confirmed, famously reliable analyst Ming-Chi Kuo reckons they'll come in the first half of 2021.

"We expect that Apple's new products in 12 to 18 months will adopt processors made by 5nm process, including the new 2H20 5G iPhone, new 2H20 iPad equipped with mini LED and new 1H21 Mac equipped with the own-design processor," said Kuo in a note obtained by MacRumors.

Apple has consistently designed its own processors for its smartphones, starting with the inaugural iPhone in 2007. The following year, Cupertino boosted its silicon efforts with the acquisition of PA Semi (formerly Palo Alto Semiconductor) for a cool $278m. Despite that, for its laptop and desktop lines, it has steadfastly clung to Intel's chips since 2005, largely motivated by performance reasons.

But in the past few years, the performance gap between Arm-based chips and Intel's Core line has narrowed dramatically, with the former now appearing like an increasingly viable alternative for all but the most demanding of users. So far, a trickle of manufacturers have released machines powered by Qualcomm's Snapdragon 8cx platform, which promises multi-day battery life and integrated cellular connectivity.

Of course, there are obvious downsides with switching to a new CPU architecture entirely, not least when it comes to app compatibility. Older apps that haven't been specially compiled for Apple's rumoured Arm chipsets will inevitably have to run in an emulator, which will have a knockdown effect on overall performance.

Apple is undoubtedly prepared for this. Indeed, over the past three decades, Apple has flirted with multiple different microarchitectures and CPU manufacturers, moving from Motorola to IBM, and onto to Intel.

When it switched from Motorola's 68000 platform to PowerPC, it provided users an emulator. And after Apple ditched Big Blue's PowerPC silicon for x86, it bundled OS X with the Rosetta binary translator, which allowed punters to use their older apps as before.

This was an integral part of OS X for almost six years, before being ditched in 2011 with the release of OS X 10.7 Lion. By this point, most users had moved off their older software.

If Apple does decide to ship Macs with its own Arm-based silicon, there would still be a lot of questions to answer. For example, what would it mean for those who use the Mac for high-intensity applications, like video editing? Would they have to limp on, or would Apple continue to offer more performant Intel-based machines for them? And what about Mac gaming, which has enjoyed a slight renaissance in recent years, thanks to the presence of Steam and increasing enthusiasm from indie and AAA developers alike?

We've asked Apple to comment. And while the likelihood of it saying anything of substance is about as high as East Stirlingshire FC winning the UEFA Europa League, we'll be sure to update if we hear back. ®