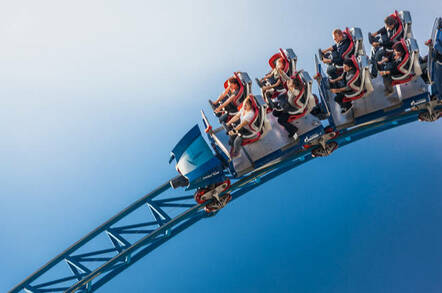 Bork!Bork!Bork! There are two things one doesn't want to see before boarding a roller coaster. The first, an employee clutching a large bolt, saying "No, I don't know where it came from either..." The second begins with B.

Today's entry in the Bible of Borkage comes from Register reader Steve and was snapped at Germany's Europa park a couple of seasons ago. 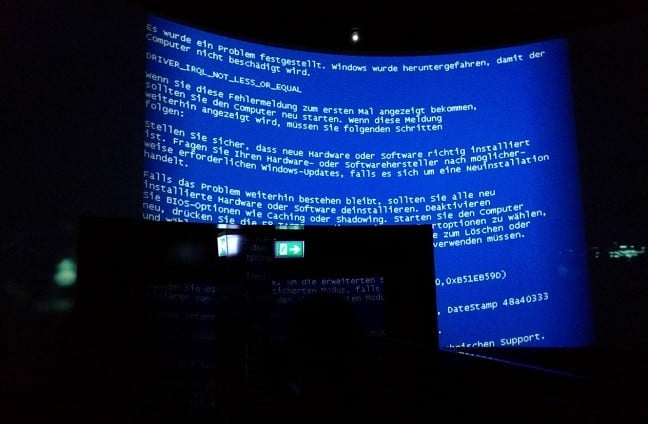 Nothing to see here... keep waiting in line

As Steve was patiently waiting in line for his turn on the mighty Blue Fire Megacoaster, a kilometre-long puke-inducing rocket of a ride, his attention was abruptly drawn to the second thing you really don't want to see before boarding something that does 0 to 100km/h in 2.5 seconds.

Perhaps in tribute to the roller coaster's name, the screen was glowing with the unmistakable hue of a Blue Screen of Death. A DRIVER_IRQL_NOT_LESS_OR_EQUAL error replete with localised text is not the most reassuring thing in the world to see when you're about to pull 3.5Gs.

The other screens were orifices for Russian outfit Gazprom, spurting, as Steve put it, "corporate bollocks about how great extracting gas from the Arctic was".

One can hardly blame Windows for doing the computing equivalent of ending it all.

Seen Windows being poorly out the world, or Linux letting the side down? Email The Register and spread the BSOD joy. ®

Going shopping for a BSOD? We've found 'em in store at M&S

PLUS: A reader spots a Timex Sinclair 1000 in the wild