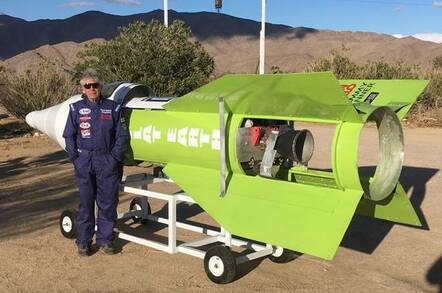 The sad news that steam-rocket fan "Mad" Mike Hughes has taken his final flight reached Vulture Central over the weekend.

Saturday's launch should have seen Hughes ascend to new heights atop his homebrew rocket, but judging by videos floating about on social media, a parachute deployed just after take-off, and Hughes plummeted to Earth shortly after.

His ongoing attempts to prove the Earth is flat by flying really high in a rocket and looking at it was being documented by the Science Channel.

Michael 'Mad Mike' Hughes tragically passed away today during an attempt to launch his homemade rocket. Our thoughts & prayers go out to his family & friends during this difficult time. It was always his dream to do this launch & Science Channel was there to chronicle his journey pic.twitter.com/GxwjpVf2md

Limo driver Hughes had previously managed a launch to just over 570 metres in 2018 but had failed to get off the ground in 2019. He was aiming to ride his homemade rocket to higher than 1,500 metres when the accident happened.

Saturday's launch would not have been the one to prove the flat Earth thing one way or another; Hughes had lofty ambitions to fly his rocket into space for that purpose. Indeed, getting a rocket based on the steam technology used by Hughes past the Kármán line (100km up) would have been challenging to say the least.

Holder of the record for longest ramp jump in a Lincoln Town Car limousine, Hughes had received a substantial chunk of funding from Flat Earthers, who believe the Earth is a flat disk rather than spherical.

We are sad to note Hughes' passing, and cannot help wishing that he had strapped a camera to a balloon in order to answer his question.

We suspect that a dedicated Flat Earther would insist that such images had been doctored or otherwise faked by the shadowy government and business groups with an interest in keeping the population deceived. The evidence of spacecraft, astronauts and big ol' balloons is but nothing compared to what Hughes' rocket might have seen.

A Hughes failure: Flat Earther rocketeer can't get it up yet again

Video 'Mad' Mike living up to his nickname

He also developed one of the first ever flight simulators

US rapper slams Earth is Round conspiracy in Twitter marathon