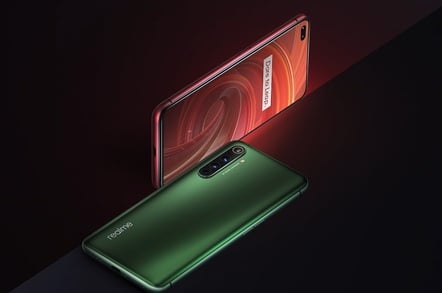 Unfazed by the cancellation of Mobile World Congress, Realme has pulled the sheets off its latest blower – the Realme X50 Pro 5G.

Although Realme isn't a household name, you're probably familiar with some of its sister brands, including OPPO and Vivo. It's owned by the same parent company, BBK Electronics, and debuted on the UK market last year after a strong showing in China and India. It's broadly analogous to what Honor is to Huawei, offering mid-range phones to a slightly younger audience.

The display is a 6.44-inch Super AMOLED affair, which offers a 90Hz refresh rate, and comes in a slightly tall 20:9 aspect ratio – although not nearly as extreme as the Sony Xperia 1 II. Thanks to its tight bezels, the front of the phone is almost entirely covered with screen, save for a small oblong cut-out for the selfie camera.

On that front, the phone comes with a 32MP front-facing primary shooter, which is powered by Sony's IMX616 sensor. This is accompanied by a secondary 8MP ultra-wide angle camera, which promises a 105-degree field of view.

It's also worth noting that the Realme X50 Pro 5G uses an under-screen fingerprint reader, which it says can recognise users in 0.27 seconds. While that sounds impressive, we're yet to encounter a single in-display sensor that can match the accuracy of a physical, dedicated fingerprint reader.

Turning the Realme X50 Pro 5G around, you'll spot four cameras, with the primary being a 64MP affair. This is accompanied by an 8MP ultra-wide-angle lens, an unspecified portrait lens, and a 12MP telephoto lens, the latter of which being capable of 20x hybrid zoom.

Realme is quick to tout the capabilities of its 64W SuperDart charging system, which can fully charge the handset from in as little as 35 minutes. The X50 Pro 5G includes a dual-cell 4,200mAh battery, which, though not exactly earth-shattering, is still fairly decent.

Punters will have two colors to choose from, "moss green" and "rust red", suggesting Realme decided to go with a somewhat Middlesbrough aesthetic for its latest devices.

Regional pricing and availability will be confirmed in the coming weeks, with the first handsets hitting shelves in April. Of course, it'll have stiff competition, with Xiaomi and TCL each offering 5G blowers in the same price bracket. ®