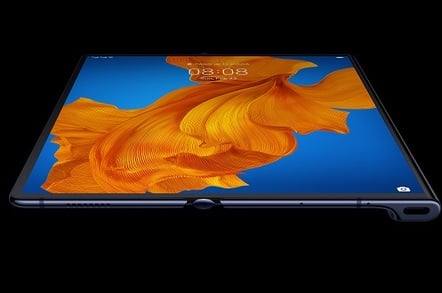 Huawei has lifted the lid on its latest pholdable – the Mate Xs. This is the follow-up to last year's coveted tablet hybrid, which was released in China late last year.

While Samsung's Galaxy Z Flip represented a radical rethinking of the company's foldable strategy, the Mate Xs is only a modest tweak on the previous design, touting an improved hinge and slightly better specs. It consists of two displays – one 6.6-inch and one 6.38-inch, which combine to become an 8-inch tablet.

Durability is the name of the game here, and Huawei said it has reworked the 180-degree hinge to be more resistant to the casual indignities of everyday use. It consists of over 100 interlocking parts, with much of the construction deriving of a zirconium-based liquid metal alloy.

Under the hood, you'll find Huawei's Kirin 990 5G SoC, with connectivity provided by one of its Baolong modems, which supports both 5G NSA and SA.

The Kirin 990 5G is an octa-core affair, and consists of two super-sized custom-designed Cortex-A76 cores, two large Cortex-A76 cores, and a further four small Cortex-A55 cores, running at a base rate of 2.86Ghz. Graphics processing comes in the form of a 16-core Mali-G76 GPU.

The camera system remains much the same, with users folding the device over to take selfies with the more potent main camera, rather than rely on comparatively weedier dedicated front-facing cameras.

As is the case with previous flagships, Huawei uses Leica lenses, with a 40MP main camera, a 16MP ultra-wide angle sensor, an 8MP telephoto camera, and a 3D depth-sensing camera to help provide the lovely bokeh-saturation you'd expect from a nice portrait shot.

The Huawei Mate Xs runs EMUI 10.0.1, the firm's latest skin running on top of the open-source version of Android 10. With Google Play a non-starter, thanks to the Trump administration's Entity List, it instead comes with the Huawei AppGallery.

Huawei has been pushing its AppGallery of late, with over 3,000 engineers said to be dedicated to the company's app ecosystem.

The Huawei Mate Xs comes with a pricetag of €2,499 – over a full grand more than the Samsung Z Flip and the ill-reviewed Motorola Razr. As yet, there's no word when it'll eventually make its way to these shores. ®