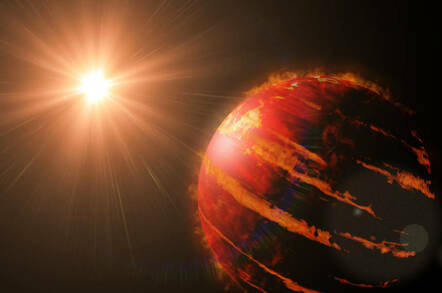 Astronomers have discovered a hot Jupiter-like exoplanet with the shortest orbital period yet: a year on this large puffy world lasts just 18 hours.

“We’re excited to announce the discovery of NGTS-10b, an extremely short period Jupiter-sized planet orbiting a star not too dissimilar from our Sun,” said James McCormac, a physics postdoctoral research fellow at Warwick uni in England. The findings were published in a paper in the Monthly Review of the Royal Astronomical Society on Thursday.

NGTS-10b was spotted by the Next-Generation Transit Survey (NGTS), an array of 12 small, ground-based telescopes in the Atacama desert in Chile. The device hunts for worlds far beyond the Solar System using the transit method, which detects periodic dips in the brightness of distant stars as orbiting exoplanets pass in front of them.

By that measure, hot Jupiters like NGTS-10b should be easy to spot. Not only do their large sizes lead to a more obvious change in brightness as they cross a star, their short orbital period means experts should see them transiting frequently.

But they are, in fact, surprisingly rare, McCormac said. “Of the hundreds of hot Jupiters currently known, there are only seven that have an orbital period of less than one day.”

NGTS-10b tops that tiny list for having the shortest orbital period of them all. A year on the planet is done and dusted in just 18 hours – it must be a nightmare for any extraterrestrials living on the exoplanet to both plan and celebrate birthday parties.

Its orbit is completed so quickly because it lies so close to its parent star, which is slightly smaller and cooler than our Sun. NGTS-10b circles its star at a distance that stretches just twice the diameter of its star. For comparison, if Mercury, the nearest planet to the Sun, were to orbit at the same distance it would be 27 times closer than it is now.

The academics believe the zippy exoplanet is tidally locked to its star, meaning one side is constantly bathed in sunlight while the other side is cold and dark. They hope to continue studying NGTS-10 and believe it is a strong candidate for follow-up observations with NASA’s James Webb Space Telescope to be launched in 2021-ish.. hopefully.

Astronomers may have to be quick though, since the tidal forces could destroy the exoplanet. “Over the next ten years, it might be possible to see this planet spiraling in,” said Daniel Bayliss, co-author of the paper and an assistant astrophysics professor at Warwick.

“We’ll be able to use NGTS to monitor this over a decade. If we could see the orbital period start to decrease and the planet start to spiral in, that would tell us a lot about the structure of the planet that we don’t know yet.”

It is believed hot Jupiters begin their lives further away from their parent stars, and gradually migrate inwards by interacting with other giant planets or through other means of gravitational forces.

“We are either very lucky to catch them in this short period orbit, or the processes by which the planet migrates into the star are less efficient than we imagine, in which case it can live in this configuration for a longer period of time,” said David Brown, co-author of the paper and a research fellow at Warwick.

“Everything that we know about planet formation tells us that planets and stars form at the same time,” Bayliss added. "The best model that we’ve got suggests that the star is about ten billion years old and we’d assume that the planet is too. Either we are seeing it in the last stages of its life, or somehow it’s able to live here longer than it should."

NGTS-10b is located about 1,000 light years away, and is about 20 per cent larger than Jupiter and twice its mass. ®