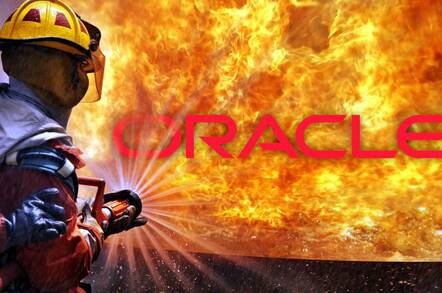 The financial group suing Oracle for allegedly deceiving investors by inflating its cloud revenue this week took a third stab at articulating its claim against the database giant.

Since the City of Sunrise Firefighters' Pension Fund filed its initial 19-page complaint in August 2018, pushback from Oracle and the judge overseeing the case, Beth Labson Freeman, have forced the plaintiff to provide greater details about supposed violations of the law to allow the case to proceed.

In December last year, the US federal district court hearing the case found the evidence insufficient to establish that the defendants knowingly engaged in wrongdoing, and granted Oracle's motion to dismiss the lawsuit – with leave for the plaintiff to amend the claim.

In other words, the Cali-based court will continue to entertain further arguments if the plaintiff can more convincingly tie its evidence to specific violations of the law. And so, on Monday, the plaintiff filed a third complaint [PDF], now expanded to 164 pages, covering Oracle's supposed malfeasance.

Former Oracle product manager says he was forced out for refusing to deceive customers. Now he's suing the biz

The basis of the lawsuit remains the same. It's claimed that Oracle misled its investors about the sales of its cloud products by threatening customers with expensive software licensing audits unless they agreed to use Oracle's cloud software. The suit also claims that Oracle offered customers large discounts on on-premises products if they accepted short-term cloud contracts they didn't want and were unlikely to use.

The latest amended complaint is full of unflattering statements about Oracle's cloud technology. For example, it quotes an October 2017 email that Kurian, as head of product development, wrote to EVP Steve Miranda and other senior execs about the poor interface for Oracle Human Capital Management Cloud.

"I want to make sure that the entire HCM dev[elopement] organization understands what a disgrace your UI [user interface] is and stop living in denial on that," Kurian wrote, adding:

I continue to get extraordinary pressure from our two CEOs [Mark Hurd and Safra Catz] and LJE [Larry Ellison] himself that the UI [user interface] is not tenable – that state is your collective responsibility and we should avoid pretending that there is not an issue ... the core product UI [user interface] is awful.

Until you all collectively accept the mess you have made and the need to move quickly we are talking past one another.

Kurian also said the interface was so dismal that a longtime Oracle customer, Netherlands-based Rabobank, refused to have anything to do with it:

This loss [of the sale to Rabobank] has nothing to do with the demos that were done in the past few weeks but with the fact that the UI [user-interface] was considered so atrocious even back in July that the bank questioned whether they could even put this in front of their employees. I showed them R13 UI [Release 13, the latest cloud update] myself and the feedback was blunt that even that is not competitive.

The complaint goes on to say, "Oracle was largely unable to sell its defect-ridden cloud technology in bona fide transactions, as very few customers actually wanted to buy it. Yet the Company had to show burgeoning cloud sales in order to remain viable in the eyes of investors."

To show the necessary revenue, the complaint contends, Oracle relied on financially engineered deals – forced by audit threats or contracts attached to on-premises arrangements. It claims a senior Oracle cloud executive observed that 90 to 95 per cent of the company's cloud sales between March 15, 2017 to June 19, 2018 were engineered deals.

And it recounts other witnesses saying only less than 15 per cent of these deals renewed their cloud subscriptions once the initial term expired.

Yet for all the allegations about Oracle sales tactics and revenue shifting, it remains to be seen whether this third complaint revision will be sufficient to convince the judge that the case has merit. Judge Freeman in her order [PDF] on Oracle's motion to dismiss found the evidence didn't sufficiently establish that any of the executives named in the lawsuit knowing intended to mislead or that any of the defendants had a motive to commit fraud.

An Oracle spokesperson told The Register: “The suit has no merit and Oracle will vigorously defend against these claims.” ®

PS: El Reg is quoted in the legal filings against Oracle. In fact, the bankers' lead lawyer spoke to Nathan Biggs, whom we interviewed and publicly quoted, to boost the case against the database giant. Search the amended PDF for The Register...