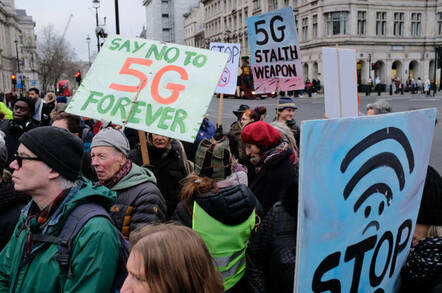 Shockingly, we say with tongue lodged firmly in cheek, the regulator didn't find evidence of a new Chernobyl poised to wipe out humanity.

Instead, it found emissions that were a minute fraction of the globally recognised dangerous levels. The maximum measured at any of the test sites was 1.5 per cent of the levels set by the International Commission on Non-Ionizing Radiation Protection (ICNIRP).

If 5G is a killer technology, spreading cancer like a chain smoker in a pub lock-in, it's clearly not a very effective one. And for anyone with a modest grasp on the evidenced-based path that science must tread, the latest results from Ofcom are no surprise. For those more conspiratorially minded, it simply backs up beliefs that the globalist lizard people have infiltrated the highest echelons of British government.

You really can't win, can you?

Coincidentally, consumer watchdog Which? yesterday published a video that tackled the biggest myths surrounding 5G connectivity, which include unsupported assertions that it's responsible for the mass-murder of bees and ordinary bods alike.

Is 5G safe? Is it killing bees? Will it have a noticeable effect on your daily phone usage?

Our Which? Computing editor @katebevan tackles some of the biggest myths surrounding 5G technology. pic.twitter.com/BsFgjnzcXv

The author, Kate Bevan, was quickly deluged by a flood of abuse and casual misogyny, with one absolute scrote describing the respected (and clever) journo as an "old hag". Hateful stuff.

And yet it's important to have these discussions, because otherwise the Alex Jones brigade will win. Already, they've scored some important victories, halting the rollout of 5G in Switzerland earlier this month. Switzerland was one of the first European countries to introduce 5G so this is a pretty dramatic change of affairs.

These anti-science sentiments have made their way to these shores, with Brighton and Hove City Council blocking plans to erect three 5G masts in October. Other towns – including Totnes, Glastonbury and Frome – have barred the technology until they are satisfied of its safety.

For the sake of clarity, Brighton and Hove council ostensibly blocked the masts because they would create "visual clutter", but it was quickly celebrated by anti-5G campaigners as a major victory.

And, amusingly, there were even anti-5G protestors at last year's MWC trade show, some of whom had made the trek from France to dress like an extra in Mad Max to be laughed at by the attendees.

I don't think they are talking about TikTok. pic.twitter.com/2hXLttYH3Z

Anti-5G campaigners allege the tech increases the risk of cancer, can cause damage to one's genetic makeup, and even introduce neurological damage.

They also claim it can exacerbate the symptoms of "electromagnetic hypersensitivity", an unproven condition whose manifestations are said to include "headaches, concentration difficulties, sleep problems, depression, lack of energy, fatigue and flu-like symptoms".

Of course, we heard the exact same claims during the late 1990s and early 2000s, when mobile phones became a lot more commonplace, and infrastructure was placed to support them.

Predictably, those going all Chicken Little shut up after a while, when it transpired that mobile phone masts were perfectly safe. But beware, they are back in abundance. ®