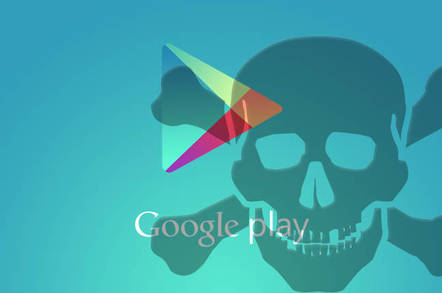 On Thursday Google confirmed it has removed nearly 600 Android apps from the Google Play Store and banned them from its ad services for violating its policies on disruptive advertising and interstitials.

"We define disruptive ads as ads that are displayed to users in unexpected ways, including impairing or interfering with the usability of device functions," said Per Bjorke, senior product manager for ad traffic quality in a blog post.

"While they can occur in-app, one form of disruptive ads we’ve seen on the rise is something we call out-of-context ads, which is when malicious developers serve ads on a mobile device when the user is not actually active in their app."

An example of a disruptive ad would be one that covers the entire mobile device screen, without an obvious way to get rid of it.

The Register asked Google whether the corresponding developer accounts have been deleted and, if so, how the company can be certain those developers will never be able to re-register under a different identity. We've not heard back.

Such purges have become a regular occurrence on platforms where third-party developers are afforded some freedom, like Google Play, the Chrome Web Store, and even the iOS App Store.

In 2015, Google crowed about its effort to fight ad fraud. In 2017, the Chocolate Factory discussed how it dealt with an Android fraud botnet. It also removed 700,000 Android apps for policy violations that year. In 2018, the company removed Android apps that incorporated third-party ad network SDKs involved in ad fraud.

In 2019, the ad biz said it removed "tens of thousands of apps and developers" from AdMob, its mobile ad platform, and its Play Store for policy violations. That year, it also brought in reinforcements, in the form of security partners ESET, Lookout, and Zimperium, an acknowledgement that it isn't up to policing its Android ecosystem on its own.

Where Google at times has been reactive, responding to reports of misbehaving apps provided by third-parties, it's trying to be proactive: Bjorke contends its latest takedown was made possible by a machine learning system trained to recognize errant ads on its own.

"We recently developed an innovative machine-learning based approach to detect when apps show out-of-context ads, which led to the enforcement we’re announcing today," said Bjorke.

The search biz said it's also making changes to Android to minimize app interruptions and give users more control over what appears on device screens. Google this week published the Developer Preview for Android 11, which contains privacy improvements like one-time permissions and limiting permission dialogs based on implied user intent.

Asked whether this latest ouster of 600 apps for bad advertising would have any effect on the prevalence of ad fraud, Augustine Fou, a cybersecurity and ad fraud researcher who advises companies about online marketing, doubted there would be any noticeable impact, given that there are about three million apps in Google Play. ®