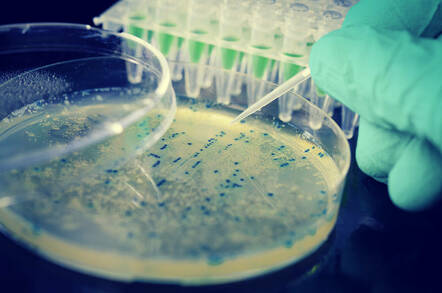 Although new strains of antibiotics are increasingly difficult to develop, scientists have done just that, with the help of a neural network.

The drug – named halicin as a hat tip to HAL 9000, the fictional AI bot in Arthur C. Clarke's Space Odyssey – was singled out by the trained software as a likely antibiotic candidate among a database of more than 6,000 complex compounds. A team of pharmacologists duly synthesized halicin in a lab, and found it was able to kill multiple strains of bacteria in Petri dishes.

Promisingly, halicin was also able to cure mice infected with a particular strain of A. baumannii, an aggressive pathogen commonly spread in hospitals, that has been resistant to all previously known antibiotics. The novel antibiotic was described in a paper published [PDF] in Cell on Thursday.

The development of new antibiotics is proving problematic as funding dries up, drug companies go broke, and germs continue to up their game. Doctors and farmers doling out doses of antibiotics recklessly has also allowed bacteria to adapt, making them more difficult to kill.

“We’re facing a growing crisis around antibiotic resistance, and this situation is being generated by both an increasing number of pathogens becoming resistant to existing antibiotics, and an anemic pipeline in the biotech and pharmaceutical industries for new antibiotics,” said James Collins, Termeer Professor of Medical Engineering and Science at MIT in the US.

Enjoy a tipple or five? You might need this AI system to tell you when it's time for a new liver

Collins and his colleagues believe neural networks can help the pharmaceutical industry pinpoint novel versions of antibiotics that function differently to previous drugs, not only beating bacteria but making it more difficult for them to develop a resistance.

First, the boffins trained a deep neural network on a dataset of 2,335 compounds from a list of FDA-approved drugs and chemicals found in plants, animals, and microbes. The binary classifier was taught to predict the likelihood that a compound would stop the spread of E.coli, a common type of bacteria that can cause food poisoning, based on its chemical structure.

Next, the model was tested against a second dataset containing another set of 6,111 compounds. The algorithm highlighted 99 that were mostly likely to be effective against E.coli. When the team studied the selection, they whittled the group down to 51. Only two of these compounds displayed properties proven to inhibit the growth of E.coli. Further inspection revealed that one was potentially less toxic than the other, and the researchers finally settled on halicin.

The drug was described as “structurally divergent from conventional antibiotics.” It managed to destroy samples of multiple strains of different pathogens, including E.coli, Mycobacterium tuberculosis, Enterobacteriaceae (CRE), A. baumannii, and Pseudomonas aeruginosa.

“These pathogens are regarded by the World Health Organization as the bacteria that most urgently require new treatments,” the eggheads wrote in the paper.

Halicin successfully eradicated M. tuberculosis, a bacteria that causes Tuberculosis, and was able to stop the growth of CRE. It was also able to treat mice infected with A. baumannii. But was unable to tackle Pseudomonas aeruginosa, a lung pathogen that has developed a high tolerance to antibiotics.

There’s still a way to go before halicin can be tested on humans. The bio-boffins said they would perform further tests and would like to work with a pharmaceutical company or a nonprofit to develop the drug. ®

Who cracked El Chapo's encrypted chats and brought down the Mexican drug kingpin? Er, his IT manager