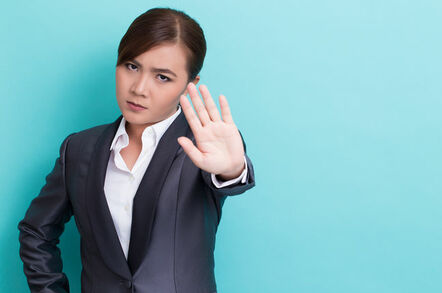 The Internet Society's own members are now opposing its sale of the .org internet registry to an unknown private equity firm.

The Chapters Advisory Council, the official voice of Internet Society (ISOC) members, will vote this month on whether to approve a formal recommendation that the society “not proceed [with the sale] unless a number of conditions are met.”

Those conditions largely comprise the publication of additional details and transparency regarding ISOC's controversial sell-off of .org. Despite months of requests, neither the society nor the proposed purchaser, Ethos Capital, have disclosed critical elements of the deal, including who would actually own the registry if the sale went through.

Meanwhile, word has reached us that Ethos Capital attempted to broker a secret peace treaty this coming weekend in Washington DC by inviting key individuals to a closed-door meeting with the goal of thrashing out an agreement all sides would be happy with. After Ethos insisted the meeting be kept brief, and a number of those opposed to the sale declined to attend, Ethos's funding for attendees' flights and accommodation was suddenly withdrawn, and the plan to hold a confab fell apart, we understand.

ISOC – and .org's current operator, the ISOC-controlled Public Interest Registry (PIR) – are still hoping to push DNS overseer ICANN to make a decision on the .org sale before the end of the month. But that looks increasingly unlikely following an aggressive letter from ICANN's external lawyers last week insisting ICANN will take as much time as it feels necessary to review the deal.

The overall lack of transparency around the $1.13bn deal has led California’s Attorney General to demand documents relating to the sale – and ISOC’s chapters are demanding the same information as a pre-condition to any sale in their proposed advice to the ISOC board.

That information includes: full details of the transaction; a financial breakdown of what Ethos Capital intends to do with .org’s 10 million internet addresses; binding commitments on limiting price increases and free speech protections; and publication of the bylaws and related corporate documents for both the replacement to the current registry operator, PIR, and the proposed “Stewardship Council” which Ethos claims will give .org users a say in future decisions.

“There is a feeling amongst chapters that ISOC seems to have disregarded community participation, failed to properly account for the potential community impact, and misread the community mindset around the .ORG TLD,” the Chapters Advisory Council's proposed advice to the ISOC board – a copy of which The Register has seen – states.

Although the advisory council has no legal ability to stop ISOC, if the proposed advice is approved by vote, and the CEO and board of trustees push ahead with the sale regardless, it could have severe repercussions for the organization’s non-profit status, and would further undermine ISOC’s position that the sale will “support the Internet Society’s vision that the Internet is for everyone.”

With opposition to the deal growing within the internet community, and following an abortive attempt by PIR to force ICANN to make a decision this month, it looks increasingly likely that the .org sell-off will fall through.

In the ICANN lawyers' letter, the organization rejected PIR’s insistence that any decision be limited to technical security and stability considerations, and said all parties “have long recognized the unique public-interest-focused nature of the .ORG domain, and ICANN's contractual role in evaluating proposed changes.”

ICANN also rejected [PDF] “any artificial restriction on the scope of ICANN's analysis” and noted “the obvious importance to the public interest of its operation.” It concluded: “ICANN is reviewing PIR's request for change of control in light of all of the relevant circumstances, and it looks forward to your client's continued cooperation in this process.”

Both ISOC and Ethos have been relatively open about the fact that any deal would need to be concluded quickly. As such, the longer discussions persist, the more risky the deal looks. That’s not all, however: anger at ISOC’s board from its members is growing and the furor risks damaging the organization itself.

Under US law, for an organization to be tax exempt, at least one third of the organization’s revenue must come from donors who each individually give less than two per cent of overall receipts, something called the “public support test.” ISOC does not meet that test because the vast majority of its income comes from a single source: the sale of .org domains, paid through a separate non-profit organization, PIR, that ISOC controls.

There is an exception, however. An organization can retain public charity status if public support is at least 10 per cent of revenues but an organization must assert it is operating as a charity, rather than a foundation, and is actively working to get its public support percentage up to 33 per cent.

For this reason, every year since its inception, ISOC has included the same explanation in its tax documents for why it should be granted charity status despite not meeting the 33 per cent test: because it is doing great work with its members around the world.

“Internet Society is organized and operated to attract new and additional support on a continuous basis. Internet Society involves both individual and corporate members in its activities,” the explanation reads.

In that sense, while ISOC is not in any way reliant on its members to function financially, it is reliant on their existence and the work they do to justify its tax-exempt status. The proposed .org sale is deeply unpopular with ISOC chapters, and any break between the headquarters in Virginia, USA, and its global members risks fracturing that corporate balance.

Transparency? We've heard of it

Tension has been simmering for a long time, as made clear by an earlier recommendation by the Chapters Advisory Council that the ISOC board improve its transparency and accountability.

That recommendation was rejected by the board chair who formally responded: “Let me point out that no matter how strict we make our bylaws regarding board transparency, the community will always need to put a certain level of trust in its trustees (thus the name).” It concluded: “In our humble opinion, this board already works in a very transparent way.”

Internet's safe-keepers forced to postpone crucial DNSSEC root key signing ceremony – no, not a hacker attack, but because they can't open a safe

That lack of transparency was never more clear than when the ISOC board claimed to have met for two weeks in November to discuss the Ethos Capital offer to buy .org, but made no mention of the proposal and only made ISOC members and chapters aware of the decision after it had been made.

With a spotlight on ISOC’s secretive deliberations – and with board members now claiming they are subject to a non-disclosure agreement over the sale – the organization has added skeleton minutes that provide little or no insight into deliberations. It is not clear when those minutes were added – no update date is provided.

“The primary purpose of the Chapters Advisory Council shall be to channel and facilitate advice and recommendations to and from the President and Board of Trustees of the Internet Society in a bottom up manner, on any matters of concern or interest to the Chapter AC and ISOC Chapters,” reads the official description of the council on ISOC’s website.

With Ethos having failed to broker a secret deal, and ICANN indicating that it will consider the public interest in deciding whether to approve the sale, if ISOC’s advisory council does vote to advise the board not to move forward with the sale, the Internet Society will face a stark choice: stick by the secretive billionaires funding the purchase of .org with the added risk of blowing up the entire organization; or walk away from the deal. ®