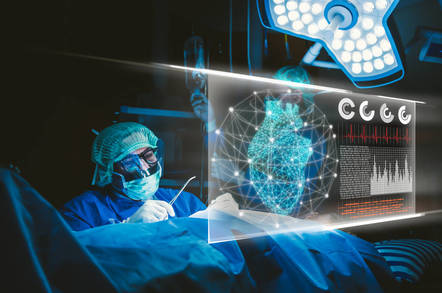 While the faithful were gathered for Oracle's OpenWorld Europe (OOW) knees-up at London's Excel centre, boffins using the company's cloud have been busy creating a virtual human.

Far be it from us to suggest the company's emissions regarding the potential of its cloud business might have been perhaps a little "virtual" in the past, but wares in the form of Oracle's Cloud Infrastructure High Performance Computing service (HPC) has been put to use by ELEM Biotech, a biomedical spin-off of the Barcelona Supercomputing Centre, to "create" virtual humans.

Doubtless much to the disappointment of our The Register Plays Games correspondent, the models are for the purpose of development and validation of medical treatments rather than a polygon-heavy bangbangfest.

However, some serious compute is needed to bring human building blocks to virtual life, which is where MareNostrum, a hulking beast of a supercomputer lurking in the Barcelona Supercomputing Center, comes in. Running in a deconsecrated chapel, the machine will eventually rock along at 13.7 PFLOPS. Don't tell Oracle CTO and founder Larry Ellison, but the boffins there prefer their Linux to be SUSE-flavoured rather than Oracle's take on the OS.

The Alya Red virtual human platform has been developed for 15 years in Barcelona, and ELEM has used the thing to replicate 3D models of human organs from patient scans. The operation of the organs can then be simulated, and diseases or treatments modelled like an overly detailed Sims enhancement pack.

As with many academic research project, the challenge is commercialising the activity, which is where Big Red and its cloudy HPC comes in. The ELEM gang were able to recompile the code for Oracle Cloud Infrastructure instances "without requiring any additional library or adjustment", according to CTO Mariano Vazquez. Commercial clients can then run the virtual human as a software-as-a-service application rather than requiring their own supercomputer.

Creating a virtual human has long been a goal of researchers. As well as reducing the requirement for animals in testing, the technology could also lead to efficiencies in clinical trials and treatment selection. The US Food and Drug Administration (FDA) put out an RFI last year for a Virtual Heart in order to test medical devices.

The Barcelona Supercomputing Center is also a core partner in the University College London (UCL)-led CompBioMed consortium "focused on the use and development of computational methods for biomedical applications".

In answer to a question from The Register, which attended OOW, Professor Andrea Townsend-Nicholson of UCL said that "both BSC and ELEM are working on aspects of the Virtual Human but on two different platforms: BSC on MareNostrum and ELEM, in collaboration with Oracle, in the cloud."

ELEM Biotech itself has yet to respond to our questions, but we're sure that the involvement of Oracle won't result in costs that would stop a human heart mid-beat before the virtual version can get started.

Although judging by recent events we can't help but wonder if virtual humanity could be the order of the day somewhere in the bowels of Big Red. ®