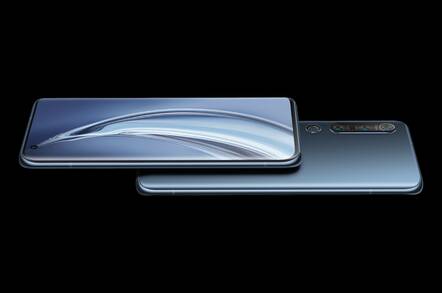 Due to be released later this month, the Mi 10 and Mi 10 Pro both pack Qualcomm's latest Snapdragon 865 platform, as well as a 108MP rear-facing primary camera.

For its latest effort, Xiaomi has splashed out on LPDDR5 RAM, which supports a maximum transmission rate of 5,500Mbps. This is paired with UFS 3.0 flash storage, write speeds of up to 730MB per second. That'll be particularly helpful when shooting large 8K videos. Both phones also support the latest Wi-Fi 6 networking gear, which is measurably faster than the previous standard.

Then there's the display, with both the vanilla Mi 10 and the beefier Mi 10 Pro packing a 6.67-inch AMOLED display, with a small hole-punch cut-out for the front-facing 20MP selfie camera. The screen has a peak brightness of 1200nits and a fluid 90Hz refresh rate.

Although both variants have a 108MP rear-facing shooter, they differ when it comes to the constellation of supporting cameras.

In addition to the primary camera, the Mi 10 Pro includes three others – a 20MP ultra wide-angle lens, a 50mm portrait lens with 2x optical zoom, and a telephoto lens with 10x hybrid zoom. This system won the Xiaomi Mi 10 Pro a DxOMark camera score of 124, which makes it the highest-ranking camera smartphone for now.

Meanwhile, the bog-standard Mi 10 comes with a 2MP depth sensor, a 2MP macro shooter, and a 13MP ultra-wide lens.

On the power front, the Mi Pro has a 4,500mAh battery, which supports 50W fast-charging and 30W wireless charging. It also supports 10W reverse charging, allowing the phone to transform into an ad-hoc wireless charging mat.

Its weedier younger brother has a slightly bigger 4,780mAh battery, but the wired fast-charging is dropped to just 30W. It keeps the same wireless and reverse-charging systems, however.

Xiaomi anarchy in the UK: Chinese tat-flinger wants to slip its cheapo flagships in Brit pockets

As you might have guessed, the Mi 10 series will debut in China. Pre-orders for the device opened earlier today.

So far, there's no word on when the Mi 10 Series will make its way to the UK or the rest of Europe. That said, given Xiaomi's intentions for the Western phone markets, we doubt it'll take very long. ®