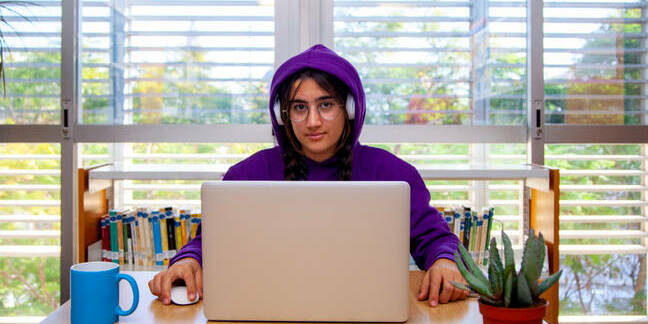 The UK's National Crime Agency has publicly distanced itself from a poster urging parents to call police if their child has installed Kali Linux, Tor or – brace yourself – Discord.

Issued by the West Midlands Regional Organised Crime Unit (WMROCU) via local area councils, the poster in question lists a slack handful of common infosec tools – as well as some that clearly have nothing to do with computer security.

Should your child install Kali Linux, virtual machines (the image on the poster looks like Virtualbox) or internet privacy tool Tor, West Midlands Police wants to know immediately. And if – Heaven forfend – your sprog installs Metasploit to learn how to secure code, uses free chat service for gamers Discord, or gets a Wi-Fi Pineapple for research, you may as well report straight to your nearest prison and abandon your tainted offspring forever.

"If you see any of these on their computer, or have a child you think is hacking, let us know so we can give advice and engage them into positive diversions," intones the offending poster, forwarded to us by a reader and which we reproduce below in all its glory. 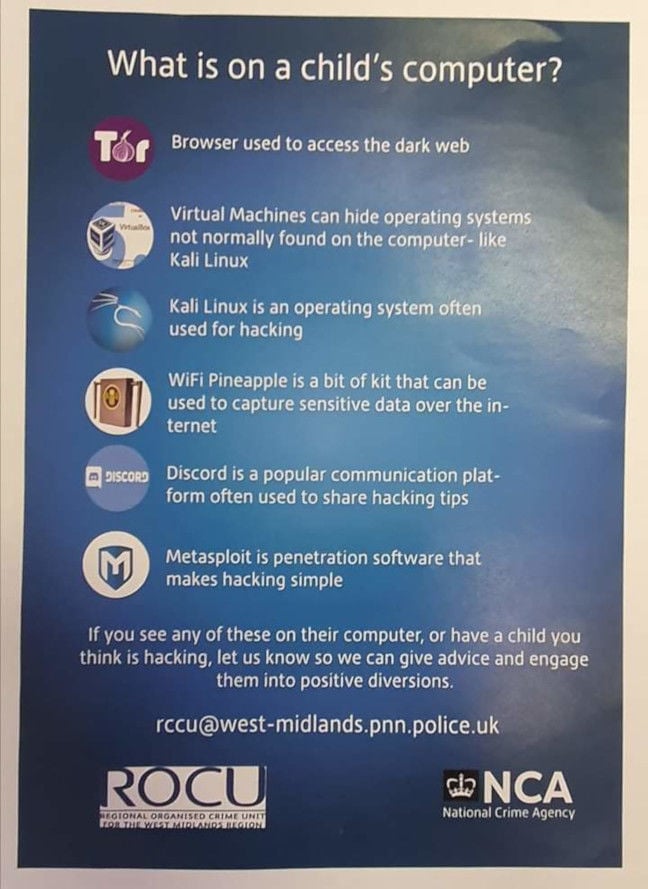 Observant readers will have spotted the National Crime Agency logo alongside that of the WMROCU. Strangely enough, the NCA was not at all impressed to have been linked with this obvious bollocks.

Good evening - the NCA was not involved in the production or release of this poster.

There are many tools which tech-savvy children use, some of which can be used for both legal & illegal purposes, so it is vital that parents and children know how these tools can be used safely.

The Register has emailed WMROCU via the address on the poster to ask some pertinent questions. If the coppers reply, we'll update this article – though we have a sneaky feeling they're probably hoping all of this goes away.

Snark aside, ignorance about infosec abounds. Even Metasploit, highlighted in the WMROCU poster as an example of nefarious hacking software, has entirely legitimate uses: a quick internet search for UK infosec courses shows plenty of syllabi that include how to use Metasploit as a white-hat tool.

Jim O'Gorman of Offensive Security, whose team maintains Kali Linux, passed us this comment: "The whole situation reminds me of the generational scares that happen with rock music, video games, and so on. Hopefully, no parent would take it seriously and feel like they have to call the police on their own children if they find them using Kali or chatting with others on Discord as that's pretty ludicrous. These are all awesome opportunities for parents to engage with their children, find common interests, and spend time together while helping the child learn skills that will help them later in life. If you don't understand something your child is into, instead of freaking out about it, just ask the kid and learn from them. In the end, none of this entire issue has anything to do with Kali or any of the other tools called out in the poster, instead it just has to do with how to be a good engaged parent and some people's misunderstanding of what that means."

The East Midlands Special Operations Unit (EMSOU), West Midlands Regional Organised Crime Unit (WMROCU) and National Crime Agency (NCA) said in a statement: "This poster was produced to raise awareness among teachers, parents and guardians to help them advise children how to stay safe online. The poster highlighted some of the digital tools their children might be using at home.

"The software mentioned is legal and, in the vast majority of cases is used legitimately, giving great benefit to those interested in developing their digital skills. However, as with any software, it can also be misused by those with less legitimate intentions. The purpose of this poster was to provide a quick reference guide to the range of software available, so those with parental responsibility for children and young people can start up a conversation about the safe and legal use of computers and technology.

"EMSOU, WMROCU, the NCA and our many partners across UK law enforcement and beyond are working to help talented young people use their cyber skills safely for the benefit of themselves and the UK."

Confirmed: UK police forces own IMSI grabbers, but keeping schtum on use