Come, let us gaze into the black pit of desktop support 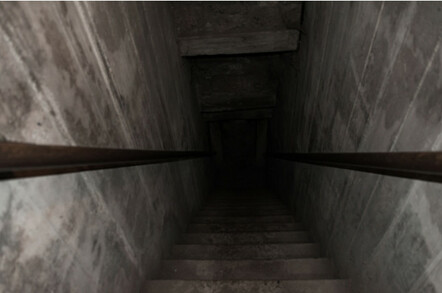 On Call Hurrah! It's Friday, which means it's time for another recollection from readers lucky enough to have support tickets assigned to them. Welcome to On Call.

Today's tale of technological turdishness comes from "Graham". No, that is not his name, but you knew that already, didn't you?

Graham's story dates back a mere five years, to a "world-class academic research institution" located somewhere in the South East of England, and warns of the very real physical danger that could befall those who do not read their emails.

Graham's role was in the hellscape known as "desktop support". "Lots of extremely expensive hardware, controlled by extremely slow, horribly dated, insecure machines with an unholy combination of firewall rules," he recalled.

"I once lost a very expensive licensing USB to an enormous electromagnet…" but that is a different story.

Being a dedicated soul, Graham was usually the first to arrive in the morning and made it his daily business to clear out the "shrapnel" that had built up in the support queue. This morning, however, one caught his eye.

"I had a very polite ticket sent in at 6am from someone complaining about a power outage." Some poor so-and-so and been pulling an all-nighter in the sub-basement and suddenly lost power to the wall sockets.

"The lights and Wi-Fi were still on," said Graham, "However, since they couldn't power on their very expensive machine, or the desktop attached to it, I dropped everything and headed over."

Graham made his way to the location in question to see what he could do. The doorway that led to the stairwell had been covered over with cardboard, newspaper and orange tape.

"Odd," he thought. This was the only way in. Perhaps somebody was indulging in some japery?

Undeterred, Graham swiftly dispensed with the obstruction and was about to stride purposefully through the now open doorway when some inner PFY-sense kicked in, and he looked down.

The stairs had gone. Replaced by a 14ft drop into the darkness below. Carefully, he backed away from the precipice.

"I tried calling the user, but the desk phones down there were all PoE, so I sent an important email back to them asking where they were. They replied almost immediately, to let me know they were with the instrument. I wrote back and asked them to meet me at the stairs."

A door opened at the base of the pit where the stairs had been and the user stepped through.

"They looked around and then up at me, simply saying 'oh'."

Both Graham and the user had cheerfully ignored the dozen or so increasingly urgent emails from the site team "regarding the foundation excavations going on in the building that morning".

As promised in those emails that the duo had been skipping, the stairs had been removed. The considerate workers had done the job out of hours. However, the user had not heard the commotion outside the sub-basement door. We cannot imagine what they were doing such that the sound of a staircase being removed was missed.

It seems a near BOFH-esque punishment for a boss rather than a basement-dwelling boffin.

"We ended up sourcing a ladder to get him out," Graham said, "and I closed the ticket without comment."

Ever gone on a mission of tech support mercy and realised that a bootable USB wasn't going to cut it? Or had your way to the server room blocked by an impromptu assault course? Send an email to On Call and tell us all about it. ®