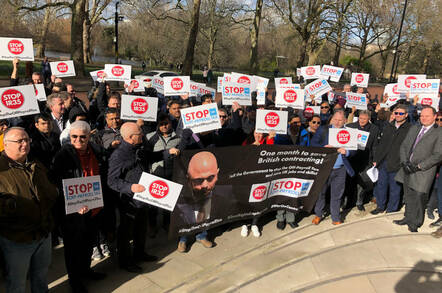 Sign-waving contractors and freelancers accumulated outside the Houses of Parliament in London's Westminster yesterday morning to protest against the UK government's controversial IR35 tax reforms.

The group then briefly marched to the Treasury building to present a letter that urges now ex-Chancellor of the Exchequer, Sajid Javid, to halt the legislation, which are due to come into effect on 6 April.

By The Register's rough count, about 150 people attended.

The open letter, which was signed by trade associations and contractor consultancies and posted on the Stop The Off-Payroll TaxTwitter stream, calls for the government to delay the April rollout and begin a "proper review of the IR35 legislation as promised".

IR35 proposals have already sent ripples across the private sector: Many large companies – including Barclays, Lloyds, HSBC, RBS, Vodafone, Microsoft, IBM and GSK – have said that they will no longer hire contractors out of fear that their firms will fall foul of the complex assessments that determine whether a contractor is within scope of IR35.

IR35 is a tax reform that was first unveiled in 1999 by the then Inland Revenue. The regulation will force medium and large businesses in the UK to set the tax status of their contractors and freelancers. Previously this was set by the contractors themselves.

Contractors found to be within the scope of the legislation – i.e. inside IR35 – will have to pay more tax than they might expect, despite not receiving benefits enjoyed by full-time employees, such as holiday or sick pay, pension, or parental leave.

The measure came into effect in the public sector in 2017. The government hoped the reforms would recoup £440m by bringing 20,000 contractors in line. The implementation in that area has been described as an "utter shambles".

The legislation is expected to affect 170,000 people, most of whom work through their own Personal Service Companies (PSCs). HMRC estimates that just 10 per cent of PSCs that should apply the legislation actually do so. If the rules are applied correctly, the tax collector has predicted it can "recoup" £1.2bn a year by 2023.

Some companies have issued blanket assessments that all contractors fall within IR35 to avoid the tax liability and possible fines from HMRC. Several contractors The Reg spoke to said their clients are pushing them into umbrella companies with pay cuts. In December, The Reg reported that contractors at RBS who were asked to move into an umbrella company faced an effective 20 per cent pay cut.

The letter delivered to the Treasury alleges that "some companies" are picking up the shortfall by offshoring their contract work overseas, or bringing people in by "abusing" the Tier 2 visa "Intra-Company" transfer rules.

"Already many contractors are reporting that they have lost their roles, others are now finding it difficult to find new roles," it reads.

As a result, contractors and freelancers are being forced into "zero rights employment", where they will be taxed as permanent employees, but not receive any of the standard benefits.

"It is now absolutely clear that the impact of this ill-considered legislation is very different from the impact predicted by the Treasury and HMRC. With so many unexpected consequences already coming to light, it is now, in our view, essential that the government pauses this legislation before it is too late."

Two MPs attended the rally to show their support. Sarah Olney, a Lib Dem MP for Richmond Park, told The Reg that IR35 is "just a really flawed bit of legislation." She said: "Because the legislation has the threat of quite severe fines against companies, employers are now just saying they're not going to take on contractors at all.

"So all of these people here today and thousands of others are finding that their livelihoods are threatened – they cannot get the work. Even the companies they've worked with for years and years and years, are afraid to take them on because [of] this new legislation coming in.

"It's completely unnecessary. There is a quid pro quo already – contractors don't pay National Insurance contributions but then they don't get a state pension, sick pay or holiday pay, maternity or paternity pay – so we don't need this legislation. It's going to be incredibly damaging not just to these individuals, but to all kinds of sectors who won't have access to the kinds of skills they really need to maintain their businesses."

Labour MP Ruth Cadbury (Brentford and Isleworth) told The Reg the reforms should be paused for at least a year to allow time for the government to review the legislation. She said it could push people into disguised remuneration schemes, such as those that caused the Loan Charge scandal. "My big fear is that people feel pushed into schemes that they can't understand, and so we end up massively inflating the existing problem."

Dave Chaplin, protest organiser and head of the Stop the Off-Payroll Tax group, said: "The new legislation is causing huge uncertainty in the freelance market. We want the chancellor to reconsider what they're doing, to delay, and engage with contractors and all relevant parties to come up with a better way to recognise and tax freelancers.

"Lots of the damage has already been done but there's still eight weeks to go."

After delivering the letter, protesters met with Lib Dem MP Tim Farron (Westmorland and Lonsdale) to discuss the issues surrounding the controversial shakeup. "The Off-Payroll Tax rollout is really short-sighted. The Conservative Party is just not getting how the modern world works. This is going to affect people's ability to pay the rent, mortgage, feed their kids and develop their business," Farron said in a statement.

In response to the protests, an HMRC spokesperson said: "We have put various measures in place to make sure that contractors and businesses know what is happening, what they need to do, and have dedicated teams providing education and support.

"The change to the long-standing off-payroll rules ensures the correct tax and National Insurance contributions is paid by shifting responsibility for employment status decisions from workers to the organisations they work for.

"It does not affect people who are self-employed under existing employment status tests and will ensure that tax that was always due is paid. Contractors who are complying with the existing rules will feel little impact."

The controversy surrounding the reforms prompted Javid to initiate a review of the IR35 in the lead up to the general election last year to ensure that the proposed changes were "right to take forward". But when the Treasury announced the review last month, it only covered how the legislation would be implemented, rather than whether it should go ahead at all.

Last week, the House of Lords initiated its own review, with a call for submissions closing less than six weeks out from the April deadline. Critics said it was "too little, too late."

Julia Kermode, chief exec of the FCSA, told The Reg: "FCSA is proud to support today's protest because the proposed legislation changes are fundamentally flawed and are already having a very detrimental impact on businesses and professional contractors. We are seeing some firms opt for cheaper resources overseas and the potential impact on the UK's economy is significant. Therefore it is essential that we join together to make ourselves heard by MPs who are the only ones with the power to prevent this disastrous legislation becoming a reality."

If you or your team have been personally impacted by the IR35 reforms, please get in touch here. ®