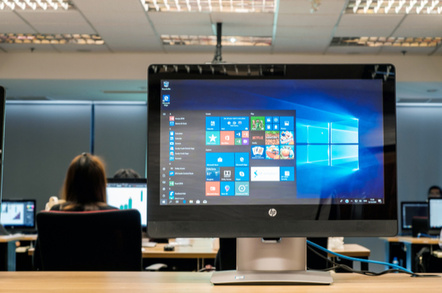 As if to remind a Microsoft world engorged with excitement at the new and shiny Windows 10X, the Insider team emitted an update last night to point out that vanilla Windows 10 is still a thing.

20H1, aka Windows 2004, has been in a moribund, nearasdammit done state for a while now. After Microsoft patched pretty much the entire world (at least as Redmond understands it) yesterday, 20H1 also received some love from the update gods as build 19041.84 slunk out of the shadows past developers distracted by the dual-screen shiny.

As one would expect, pretty much everything received a security update in the pre-release operating system, from the venerable Internet Explorer to the good old Microsoft Scripting Engine. More significant was a fix for an issue in build 19041.21 that could leave PCs in a borked state.

The problem occurred when Windows ran a scheduled task during a maintenance window. The result was a PC potentially left in an unbootable state. It's good to know that even with the latest and greatest waiting in the wings, Microsoft has remained true to its roots with the recently deceased and the almost-released both subject to booting bugs.

20H1 could well end up being the last major release of Windows 10 before the arrival of Windows 10X, as Microsoft flashed the ankles of the new operating system to developers yesterday. While the dual screens and gimmicky Wonder Bar of the Surface Neo had fans squeaking with excitement, it was the arrival of what appears to be an entirely new, container-based operating system that was the real star of the show.

Certainly, hiding what is a substantial shift in architecture behind the glamour of gizmos is a smart move that will avoid frightening the horses in the way that Windows RT did. With the all-important Win32 apps lurking in containers in a way suspiciously similar to the approach taken by 20H1's Windows Subsystem for Linux 2, compatibility will be better than Microsoft's previous attempts to move its user base, although it is unlikely to be entirely smooth sailing.

Windows 10 20H1/2004 is expected to be shipped in the coming months. The next release will then come around October or November. Windows 10X devices should be getting popped into cellophane at around the same time if Panos Panay's team sticks to plan. ®