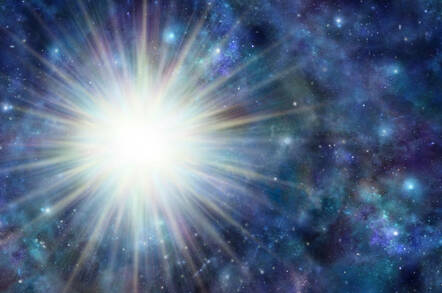 Astronomers have, for the first time, detected a fast radio burst that spews powerful radio signals from the distant depths of space on a regular schedule, according to fresh research.

Fast radio bursts are bizarre. They appear as bright blips of radio light that last less than a few milliseconds before disappearing, only to occasionally pop again unpredictably. Some have only been spotted once, and a few are known to flare up randomly now and again. Their erratic nature makes them difficult to study and scientists still don’t know what they are really caused by.

A crew of physicists working on the Canadian Hydrogen Intensity Mapping Experiment Fast Radio Burst Project (CHIME/FRB) have finally discovered one that appears to flash repeatedly in a regular manner, roughly every 16.35 days. They reported their findings [PDF] on arXiv; the paper has yet to be officially published in a peer-reviewed publication.

The researchers recorded 28 bursts from the object codenamed FRB 180916.J0158+65 – some 500 million light-years away – from September 2018 to October 2019. “We find that bursts arrive in a 4.0-day phase window, with some cycles showing no bursts, and some showing multiple bursts, within CHIME’s limited daily exposure,” they wrote.

In other words, the new burst either stays quiet or emits multiple radio signals in four-day cycles every 16.35 days or so. The periodic nature has led the team to whittle down the number of possibilities of what FRBs might be.

“Our results suggest a mechanism for periodic modulation either of the burst emission itself, or through external amplification or absorption, and disfavour models invoking purely sporadic processes,” the paper said.

Typical! You wait ages for a fast radio burst from outer space, and suddenly 13 show up

The latest discovery rules out the chance that FRBs are forged from one-off events like black hole explosions or exceptionally energetic supernovae. Instead, the researchers believe that the outbursts are caused by some regular process, like a binary system where the source of the FRBs is locked in an orbit with a star or small black hole, or perhaps they are caused by a low-mass star and a powerful pulsar circling one another.

Another popular theory involves a magnetar, a type of rotating neutron star with a strong magnetic field. The rotation period of these objects is, however, less than 12 seconds as far as we know, and that's much longer than the duration of a FRB.

The researchers need more data to crack the puzzle of what a FRB really is. “Future observations, both intensity and polarimetric, and at all wavebands, could distinguish among models and are strongly encouraged, as are searches for periodicities in other repeaters, to see if the phenomenon is generic,” they concluded. ®