The Register goes virtual and gets a bit remote with DeX 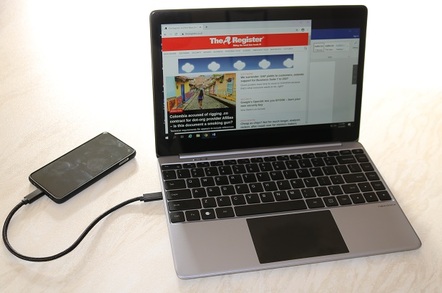 Review We had a play with the crowdfunded NexDock 2 last month and came to the conclusion that the machine was a handy host for Raspberry Pi-type devices on the move, for a price, but the Samsung DeX experience soon left us pining for a "proper" laptop.

This time around, having begged, borrowed and stolen some virtual desktop access, we took another look at the second gen NexDock and its Samsung host to see if it could be more than a lappable Pi driver.

There are a variety of ways of getting that "real" laptop experience using DeX. We had a crack at accessing Parallels' Remote Application Server (RAS) via a browser, and it is safe to say that neither DeX nor RAS particularly enjoyed the experience. A few weeks later, however, and Parallels has released an update to the RAS Android Client to support Samsung's DeX and things are quite a bit different.

Firing up the Parallels RDP client dropped us into a familiar environment from where we could either run apps directly (as configured by an administrator) or dive straight into a Windows 10 desktop. Since this is not a review of the pros and cons of Parallel RAS 17.1, we naturally jumped into Windows 10 and were pleasantly surprised by the experience.

It was, all told, seamless. Had it not been for the Samsung S10 hanging off the side, the NexDock 2 was, for all intents and purposes, a Windows 10 laptop. As with any virtualized environment, performance does depend on what resources an administrator has allocated, but for ordinary work, as well as firing up Visual Studio, things were impressively smooth.

Even killing the Wi-Fi and running on the frankly terrible 4G signal afforded by our mobile operator in the test location, the virtualized experience worked well (and the client handled the abrupt switchover without ejecting me from my session).

I worked for a few days exclusively in this mode, and had no problems once I'd worked out how to disable the trackpad of the NexDock 2, which kept responding even when an external mouse was plugged in until the OFF button was found. Streaming video worked well, as did applications using the built-in mic.

Microsoft also lobbed me some keys to Windows Virtual Desktop on Azure and, while I was unable to coax the company's own Remote Desktop client into life, it did work surprisingly well over HTML5 (in spite of bleatings within the browser that it wasn't properly supported).

Like the Parallels take on virtualization, a variety of apps, as configured by a friendly administrator, were available. Performance was also acceptable, but I reckon most users will be happier with the native client experience.

So it's a thumbs-up on using the NexDock 2 as a client if your company is a virtualized desktop shop, and DeX clients are available. It should also be noted that Microsoft and Parallels are not the only games in town – Citrix and others will be equally happy to feast on those enterprise bucks.

What Parallels also does, which presents an intriguing option for enthusiasts, is Remote Access. Think the venerable PCAnywhere, but with a DeX client. The theory is simple – run the server on your "proper" computer and then access the desktop (or selected apps) via DeX.

The company is not the only supplier of such tech, but this implementation worked impressively well.

Where traditional virtualization might have struggled when presented with something a little more demanding, such as a game, if it worked on my desktop, it worked fine on the DeX / NexDock 2 combo. Sound and visuals streamed with impressively little latency (although I'm not sure a fast action shooter would work too well on 4G – real-time strategy is more this writer's bag, to be honest) and demanding video and photo-editing apps that would have chewed through expensive virtualized resource ran as though locally. Because, in a way, they were.

Once the initial shine wore off, however, one had to wonder who that Remote Access functionality was actually for in the context of the NexDock 2. An awful lot of variables need to line up – if you have a powerful PC (or Mac) that is a desktop or can't be moved, but want full mobile access rather than just firing up an occasional app remotely, this solution could be for you.

However, you could equally pick up a relatively inexpensive laptop and do much the same with less compromise (DeX is not the only option when it comes to Remote Access or virtualization clients). Spend a little more than the retail price of the NexDock 2 and some impressive gear comes within reach.

Having now run the NexDock 2 and Samsung DeX and fired up rich desktops both via virtualization and remote access, my conclusion has to remain the same.

Despite it all working impressively well, unless you're all-in on virtualization and lack a laptop, the NexDock 2 remains something that will spend much of its time plugged into a Raspberry Pi. ®