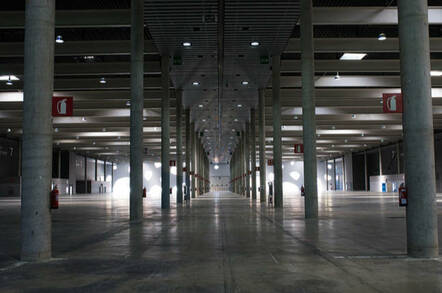 The interior of one of the pavilions of the Fira Barcelona exhibition centre. Pic: Sharon Wildie/Shutterstock

Intel is the latest big name to withdraw from the Mobile World Congress trade show, due to take place in Barcelona later this month amid growing fears about the coronavirus epidemic.

This follows moves by other large firms, including Nvidia and LG, which both dropped out of the event in the last few days, citing the same concerns.

"The safety and wellbeing of all our employees and partners is our top priority, and we have withdrawn from this year's Mobile World Congress out of an abundance of caution. We are grateful to the GSMA for their understanding and look forward to attending and supporting future Mobile World Congress events," an Intel spokesperson said in a statement.

As in previous years, Intel had been expected to announce new kit at MWC. It's not immediately known whether it will hold a virtual product launch, as Sony has said it will, or whether it'll instead wait until it's safe to do a dedicated physical launch.

In the past 24 hours, the number of vendors pulling out from MWC over coronavirus worries has snowballed. NTT Docomo, a major Japanese carrier, confirmed its withdrawal yesterday, citing "consideration of the safety of the visitors, partner companies and staff members."

Perhaps the biggest loss is MediaTek, which is one of the most prolific manufacturers of mobile SoCs, and almost entirely dominates the lower section of the market. In recent years, it has pivoted towards more high-end chipsets, targeting a segment previously dominated by Qualcomm, Samsung, and Huawei.

In a statement, MediaTek said it had been closely following the spread of the novel coronavirus, and "after careful assessment," has decided to withdraw from the trade show in order to preserve the health and safety of people. It plans to show off upcoming tech separately, although is yet to figure out how.

Meanwhile, phone vendor TCL said it had cancelled its presser, where it was expected to shed light on the direction of upcoming own-brand handsets. TCL, however, continue to maintain a booth in the MWC exhibition hall.

Another loss comes in the form of Vivo, which has historically used MWC to demonstrate a new "concept phone," which it feels exemplifies the potential direction of the smartphone industry.

In a statement, Vivo said the health and safety of its employees is a "top priority," and it will unveil its 2020 APEX concept phone at a later (unspecified) date.

Coronavirus is a potentially fatal respiratory virus. Since its discovery late last year, over 42,000 individuals, mostly in Mainland China, have contracted the disease, with over 1,000 confirmed fatalities.

The disease is spread primarily through the vaporised by-products of coughs and sneezes. Among vendors and delegates, there is a widespread fear that MWC could serve as a breeding ground for coronavirus, as over 100,000 individuals head to the crowded halls of the Barcelona Fira exhibition hall from around the world.

In response, the GSM Association, which organises the event, has introduced several preventative measures designed to protect participants. These include cleaning and sterilisation efforts, a "no handshake" policy, and banning participants flying in from coronavirus epicentre, China's Hubei Province. ®

Won't somebody think of the economy?

Analysts have reforecast sales of smartphones and PCs in China, and have reckoned they will slump dramatically between Q4 2019 and Q1 2020 as the country grapples with the coronavirus epidemic.

Canalys estimated smartphone sales will drop by between 40 and 50 per cent, and that new PC purchases will fall 20 per cent. It previously estimated more modest decreases of 7 and 8 per cent for each respective category.

This is primarily a result of the preventative measures taken by the Chinese government in recent months. Workers in part of the Hubei province have stayed home with the municipal government extending the annual Lunar New Year holiday. Much non-essential business has come to a standstill, and shopping malls are almost entirely vacant.

This has affected both online and offline retailers, with Apple temporarily closing its stores across the country, Foxconn reportedly telling Shenzhen workers not to return to work yesterday, and digital marketplaces struggling to find the logistics capacity to deliver their wares to punters.

And, as we've exhaustively catalogued, many smartphone and assorted tech vendors have changed their product launch roadmaps to cope with the spread of the virus.