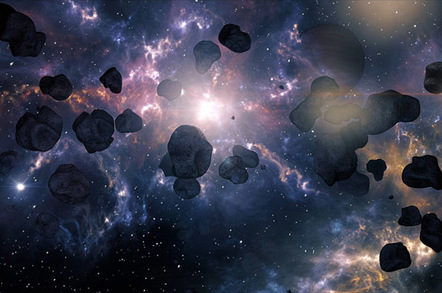 We all know the Sun's eventually going to expand and envelop the Earth, but for smaller objects further away our star will still be deadly, as its light will cause asteroids to literally spin themselves to death.

Eggheads at the University of Warwick, in England, believe that, in around six billion years time, as the Sun burns up the last of its hydrogen reserves and swells into a red giant, it’ll eject streams of energetic particles into space that will be absorbed by asteroids.

As the rocks reemit the heat back into space, the escaping photons carry momentum and exert a tiny torque on the asteroid itself. Over time, the torque increases and the body spins at a faster rate until it is ripped apart into smaller and smaller pieces, as we've seen elsewhere in our solar system.

The process is known as the Yarkovsky–O'Keefe–Radzievskii–Paddack (YORP) effect, and will be most prominent during the stages before a star turns into a white dwarf.

“When a typical star reaches the giant branch stage, its luminosity reaches a maximum of between 1,000 and 10,000 times the luminosity of our Sun,” Dimitri Veras, an astrophysicist at Warwick, said on Monday.

“Then the star contracts down into an Earth-sized white dwarf very quickly, where its luminosity drops to levels below our Sun’s. Hence, the YORP effect is very important during the giant branch phase, but almost non-existent after the star has become a white dwarf.”

Veras described the scenario in greater detail in a paper published in the Monthly Notices of the Royal Astronomical Society. He envisioned that the Sun would also obliterate the rocks in the asteroid belt through the YORP effect, spinning them increasingly rapidly until, at around one rotation every two hours, internal stress rips the rocks apart.

“For one solar-mass giant branch stars – like what our Sun will become – even exo-asteroid belt analogues will be effectively destroyed. The YORP effect in these systems is very violent and acts quickly, on the order of a million years. Not only will our own asteroid belt be destroyed, but it will be done quickly and violently. And due solely to the light from our Sun,” he added.

The remaining space dust from the broken asteroids will eventually be pulled towards the white dwarf star as a disk of debris. The pollution around these types of stars could then be studied, the paper said. Astronomers on Earth probably couldn’t do that for our own Solar System, however, since humans would have been extinguished by then as terra firma boils away during the Sun’s expansion.

Smaller asteroids that are further away from stars like our Sun will be the hardest to break apart and only rocks between one to 100 meters in diameter will get YORPed to death. Rocks larger than the dwarf planet Pluto won't destroyed by sunlight, but maybe collisions with other larger bodies will do the trick in those cases. ®