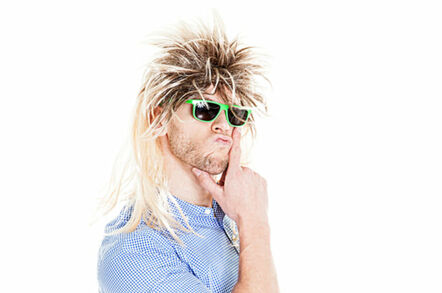 On Call Welcome back to On Call, The Register's regular reminder of just how icky things can get at the sharp, pointy end of computer support.

Today's deposit into the vault of user confusion comes from a reader the Regomatic 9000 has decided to call "Guy" and takes us back a decade, to the charming city of Leeds.

Back then, Guy was working for a tiny company that built software for salons. "It did all of the usual functions," he told us, "appointment booking, customer details, till functions etc."

Customers would frequently call in, complaining their computers wouldn't stay on. The cause was normally the same: "On inspection we'd often find the case was packed with human hair, causing it to overheat." Ewww.

Michael Dell, it seems, didn't consider the output of the whirling steel blades of scalpy doom when Dell cases were designed back in the day, and we're pretty sure the question "will it run when shoved full of hair?" never troubled the likes of HP either.

So you locked your backups away for years, huh? Allow me to introduce my colleagues, Brute, Force and Ignorance

It usually took around 18 months after installation for the hair build-up to reach component-bothering point. And it wasn't only the cases affected.

"We'd occasionally have capacitors burst in the power supplies and discover while repairing them lots of hair too," said Guy. "We had one burst in the office once, loads of black smoke came out the back.

"We thought it was on fire so we chucked it out of the front door of the office onto the street!"

Just another day on the mean streets of Leeds. However, there was one call that didn't involve an overheating PC.

Guy received a call from a customer complaining that the mouse wasn't working. A hairy mouse? Surely not.

It was a new customer, and the mouse had been tested before shipment. The customer confirmed it was plugged in, but no joy. Guy arranged for a next-day replacement, doubtless looking forward to some rewarding refreshment for a job well done.

"The customer tried the new mouse, and it still wasn't working."

Keen to solve the mystery, Guy decided to visit the site in question and deal with the problem himself. Maybe he fancied a haircut too – that detail is lost to the mists of time. Upon arrival he asked the customer to demonstrate the problem.

Those who remember the late James Doohan attempting to operate an Apple computer by holding up the mouse and talking to it in the 1986 film Star Trek IV: The Voyage Home will know what happened next.

"They picked up the mouse and were waving it around like a Nintendo Wii controller!"

Quite how a salon employee could make it into the 21st century without knowing how to operate a mouse is an interesting thing to ponder in itself.

And Star Trek's Scotty? If only they had pitched up on Earth 25 years later. He would have been able to find Siri just as useless as the rest of us.

Ever found a PC rammed full of unmentionables? Or been taken aback by a user's inability to operate what you assumed was a basic bit of kit? Of course you have, and the On Call vault of support tales is waiting for your email. ®