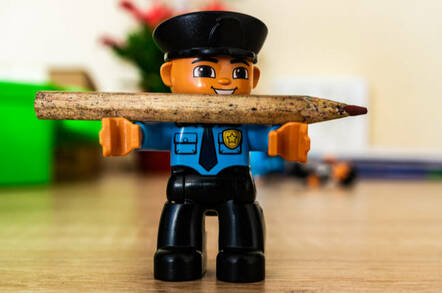 Greater Manchester Police is struggling with a partial outage of a Capita-built computer system used by frontline officers to input information.

The PoliceWorks systems, which form part of the force's new iOPS (Integrated Police Operating System) – a £27m project undertaken by everyone's favourite outsourcer – went down after a planned IT upgrade at midnight on Monday. As a result, officers have not been able to input information into the police database.

But everything's fine, the force insists. "We have robust contingency plans that are successfully executed across the force to minimise disruptions," it said in a statement.

The force switched to the new computer system in July last year. But the project has been plagued with problems, with officers complaining about lost records, delayed investigations and crime backlogs.

An investigation by the Manchester Evening News found that the number of crime investigations awaiting actions shot up 68 per cent in the first three months of the system's deployment.

The force was unable to submit its crimes figures for the region in the second half of last year, leaving a gap in the Office for National Statistics data between June and September.

It said that the current outage has not affected officers' ability to view information on the system and or response times.

There is no impact to ControlWorks [records and evidence management] or our response to calls from members of the public and we still have the ability to read all information on PoliceWorks. This means there is minimal impact to the service we provide to the public.

"We have proactively liaised with partners and have procedures in place to manage high-risk incidents, incidents regarding vulnerable people and the management of key intelligence."

The force added: "We are working closely with our suppliers and are reviewing all options in recovering the system and getting back to business as usual as quickly as possible."

Were they unencrypted? You bet they were

Spotted with stiffy in city centre