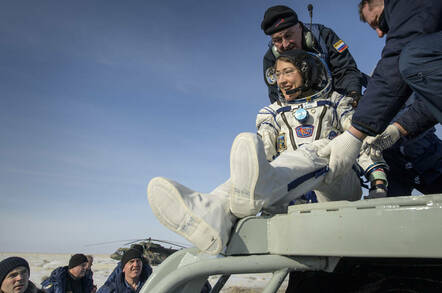 Christina Koch, NASA astronaut and engineer, has set a record after orbiting Earth in the International Space Station for 328 days – the longest amount of time spent in space on a single flight by a woman.

She is now back on terra firma, after a space capsule carrying fellow crewmates Alexander Skvortsov, Soyuz Commander of the Russian space agency Roscosmos, and Luca Parmitano, an astronaut from the European Space Agency landed in Kazakhstan on Thursday at 0912 UTC.

Koch smashed the previous record by 40 days, beating Peggy Whitson who spent 288 days aboard the ISS in 2017. She now places second for the single longest spaceflight carried out by any US astronaut, trailing behind Scott Kelly by only 12 days.

In those 328 days, Koch has circled the Earth 5,248 times – a distance of about 139 million miles (~2.2 x 108 kilometres) or 291 trips to the Moon and back. That’s not the only record she holds, however. Last year, in October, she took part in the first ever all female spacewalk alongside fellow NASA astronaut Jessica Mier.

Koch has been involved in hundreds of scientific experiments, ranging from plant biology to particle physics in microgravity. Astronauts nurtured and taste-tested Mizuna mustard greens, a leafy plant similar to arugula or rocket. She also worked with Astrobee, NASA’s three free-flying robots, capable of assisting the ISS crew with logistics as wells documenting experiments with its cameras.

After spending so long in space, Koch will undergo intense medical health tests so that scientists can study the impacts of zero gravity on the human body. NASA is eager to learn more the effects space has on a woman, especially since the agency gearing up to send more astronauts back to the Moon in 2024 and to Mars for the first time sometime in the near distant future.

Koch said she would miss “the exquisite beauty of both the planet Earth and this marvel that its amazing people created.” ®