Look to the future, Boss – you know it makes sense 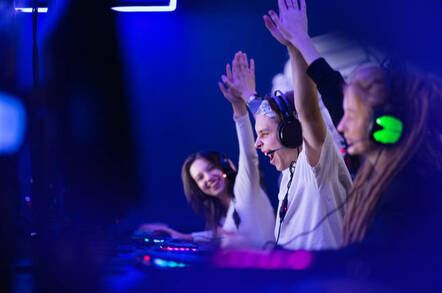 Episode 3 "How bad is it really?" the Boss asks.

And given that the Y2K thing was a big fat zero, the PFY is technically correct.

"What are we looking at?" the Director asks.

"Well I don't think it's at the level of human sacrifice and dogs and cats living together yet, but it's bad," I say.

"I don't know. I mean obviously you're going to have to prepare for a world with different Paint and Minesweeper but the rest of it – well it's anyone's guess."

"Paint and Minesweeper are gone?" the Boss blurts, no doubt wondering what he's going to be doing to fill in his day.

"Isn't there something you can do? Are they hidden somewhere or can they be downloaded?"

"Can't we just leave things as they are?" he whines.

"What, you mean without support, updates and security?" I gasp.

"Upgrades. We have to upgrade everything," the PFY says.

"The lift controller is a Windows 7 machine," the PFY says.

"And the aircon – that's got a Windows 7 controller."

"Yep!" the PFY says. "Not to mention the security system, the BMS system, and the drinking water service controller computer."

"So what are we going to have to do?"

"My priorities are the underlying infrastructure – the users will have to come second in this instance," I say.

"Why did no one know anything about this?" our IT Director asks.

"We mentioned it multiple times. Your predecessors adopted the tried and true Climate Change methodology of ignoring impending disaster."

"For a start you'll need to pay that Windows 10 preparedness consultant's bill," the PFY says, no doubt contemplating the cheque he'll want made out to "Computer Assistance Service Helpline".

"Order these two new desktops >shuffle< to replace the ones that couldn't be upgraded."

"It says here that you want a gaming headset, mouse and keyboard."

"Of course. Gaming gear's built for resiliency. You hardly want your lift crashing into the sub-basement 40 metres per second because a cheap keyboard switch didn't open at the right time."

"Oh... I.. but headsets? Why do those machines need headsets?"

"You mean why would I need a headset to Skype to the PFY to tell him how to reset the security system to let people out of the basement?"

"And why are you getting them delivered to your homes?" the Director asks.

"It's simple" I explain, as if to an idiot "they'll require advanced configuration which needs to be done precisely and sequentially. We can't have people interrupting us when the installation is going on."

"What advanced configurations that?" the Boss asks.

"Hardware drivers, BIOS handshaking, flux capacitor decoupling. Miss one of those steps and you're left with an expensive pile of melted copper and a couple of 3ft beancounters at the bottom of a lift shaft with knees where their hips should be..."

"So obviously we'd do the complete install, swap the computers over after hours and it'll be so smooth it'll seem like nothing happened."

"And how would we KNOW that something had happened?" the Boss asks, the seeds of doubt sprouting blooms of suspicion.

"I guess I could drop the old machines off to you," I say.

"Yes, but how would we know that you didn't pick up a couple of dusty old relics at a car boot sale?" the Boss asks.

"Just tell your wife and sister-in-law not to go car-boot-sale-ing that weekend," the PFY chips in.

"I think maybe we should just take a couple of steps back here," the Director says, once the shouting has stopped and the ozone smell of the Boss's impromptu "sedation" has started to waft out the air-conditioning relief vents.

"Look, it's simple," I say. "We replace those two desktop machines, then we start to roll out the rest of the infrastructure before moving on to the users."

"Yes, but how do we protect the users meantime?"

"Good point. I think that there's really only one way of protecting the company," I say.

"Replacing every desktop in the building?" the Director asks.

"Probably not," I reply.

"Relying on the antivirus software, spam protection and firewall which already protects us?" the PFY asks.

"Oh, clicking on the 'Don't remind me again' text?"

(See, and no one even had to mention moving to Linux and Libre office.)