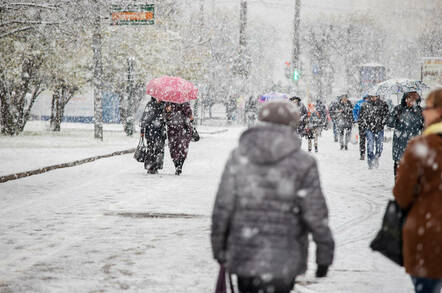 Simulations involving complex differential equations are run on supercomputers to predict the weather. The accuracy of forecasts using this approach have improved over time, though it’s still tricky to pinpoint extreme events like cold spells or heat waves.

“It may be that we need faster supercomputers to solve the governing equations of the numerical weather prediction models at higher resolutions,” Pedram Hassanzadeh, an assistant professor at the United States' Rice University’s Department of Mechanical Engineering, said on Tuesday.

“But because we don’t fully understand the physics and precursor conditions of extreme-causing weather patterns, it’s also possible that the equations aren’t fully accurate, and they won’t produce better forecasts, no matter how much computing power we put in.”

Here’s where AI may come in handy. Instead of trying to predict the weather by solving a complex mathematical problem, scientists can turn to machine learning.

“When you get these heat waves or cold spells, if you look at the weather map, you are often going to see some weird behavior in the jet stream, abnormal things like large waves or a big high-pressure system that is not moving at all,” Hassanzadeh continued.

Hassanzadeh and his colleagues trained a neural network, based on the novel Capsule Network (CapsNet) architecture proposed in 2017, to predict freezing cold and blistering hot weather events five days in advance. The model was accurate 80 per cent of the time, according to results published in the Journal of Advances in Modeling Earth Systems.

The researchers fed the AI model maps of surface temperatures, and air pressure conditions up to five kilometers in altitude, over a three-day period. By inspecting the values, the neural network learned the relationship between changes in readings and the development of extreme weather patterns. After the training process, it could predict these events up to five days in advance.

The data was split into five classifications of extreme cold and hot weather patterns in various regions in North America.

They say lightning never strikes twice, but boffins have built an AI to show where it'll come next

“We used simulated data, although the computer model we used produces data with complexity very similar to that of the real climate system,” Hassanzadeh told The Register. "But the advantage of the simulated data is that we have many samples, so we could provide a proof of concept for our framework."

The researchers are planning to test their model using more realistic data before attempting to use real weather readings taken from satellites and weather balloons. They hope this should increase the prediction time from up to five days to ten days.

“There are two changes we need to make to our current algorithm. One is to input more variables into our CapsNet, such as information from soil moisture, sea surface temperature from the Pacific and Atlantic Oceans, information from the tropics. And to make our CapsNet account for the sphericity of the Earth [to take into account] the periodicity in the longitudinal direction and existence of the poles,” Hassanzadeh explained.

AI models shouldn’t replace current numerical methods altogether. Hassanzadeh said they should be implemented as an additional predictive tool. Neural networks like CapsNet are cheaper to run than supercomputer simulations, he said, and can act as an early warning to guide more detailed numerical models. ®

Comment Airliners do it all the time - but these aren't airliners

NASA 90% certain of lift-off on Saturday