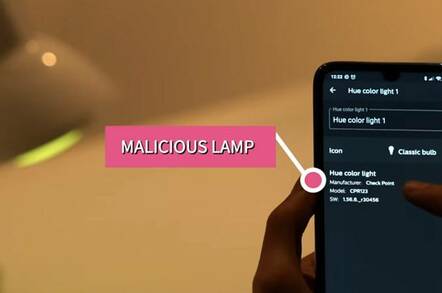 Researchers at Check Point have demonstrated how to infect a network with malware via a simple IoT device, a Philips Hue smart lightbulb.

This is an exercise in escalation. There are a couple of vulnerabilities involved. One is CVE-2020-6007 which is a buffer overflow in the Philips Hue Bridge controller firmware, in the part of the software that adds new devices to the controller. The other is based on 2016 research on how to persuade a Hue lightbulb to change its affinity from one controller to another. In order to pull this off, you need a Zigbee transmitter in close proximity to the target (Zigbee is the mesh-networking standard used by the Hue system).

The attack described by Check Point involves first taking over the lamp, updating it with malicious firmware, and then making it misbehave. The user then follows the procedure to reset the lamp by removing it and then re-adding to their Hue controller. This triggers the buffer overflow vulnerability via the specially crafted firmware, executing malware on the Hue Bridge. The bridge is connected to the local TCP/IP network, so the malware can now look for computers to compromise. In the example, the EternalBlue exploit is successfully used against a Windows PC. 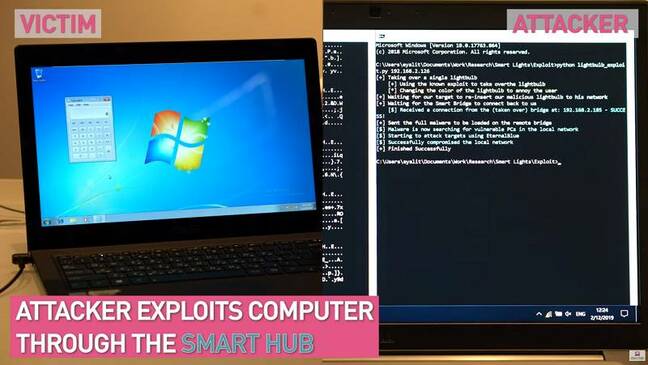 Escalating the attack to compromise a Windows PC

Philips has already made a patch available for its Hue Bridge, but Check Point said it was postponing "the release of the full technical details" to give more time for it to be downloaded and installed on affected products. There is an auto-update mechanism but it may not always be enabled.

Although a colourful attack, the requirement to first attack a lightbulb over Zigbee sounds like it will limit its potential impact in most homes. The 2016 security paper envisaged a drone-based attack.

"By flying such a drone in a zig-zag pattern high over a city, an attacker can disable all the Philips Hue smart lamps in city centers within a few minutes," it said. Philips, however, responded with an update that reduces infection range to 1m or less, making the drone idea ineffective. It is not possible to assess the risk fully until more details are published.

The real purpose of Check Point's post is to sell businesses on the idea of IoT security using its "on-device runtime protection," though the prospect of having to maintain anti-malware agents on every smart lightbulb is not an appealing one.

What may give pause for thought, though, is that the Philips Hue devices are described as "very hard targets for finding and exploiting software vulnerabilities" by the 2016 researchers, but still proved to be vulnerable. There are no doubt plenty of easier targets out there, bearing in mind the proliferation of low-cost IoT devices like cameras and home appliances. ®