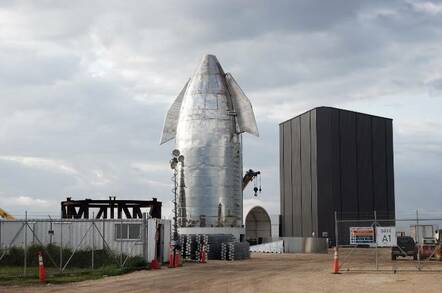 Pop-star accomplice Elon Musk on Tuesday indicated he hopes to fly his Starship over Texas – and pocketed a major deal to launch a satellite for NASA.

The billionaire SpaceX supremo-slash-techno-hobbyist hopes to take Starship to the Moon and beyond with people on-board, eventually. For now, according to documents filed with US communications watchdogs at least, SpaceX plans to launch the stainless steel craft for a 20-kilometre (12-mile) altitude test, between March and September, from its pad in Boca Chica, Texas.

"This [Special Temporary Authority] is necessary to authorize Starship suborbital test vehicle communications for SpaceX Mission 1578 from the Boca Chica launch pad, and the experimental recovery following the suborbital launch," SpaceX said in its application.

If the launch goes according to plan, it'll be the highest Starship has flown, marking a milestone for Musk.

His SpaceX outfit also bagged a major exploration deal with NASA. The space agency said it had agreed to give the biz the $80.4m contract to launch its Plankton, Aerosol, Cloud, and ocean Ecosystem (PACE) climate-monitoring satellite into Earth's orbit.

The 1,700 kg (3,748 lb) bird is light enough to use one of SpaceX's standard Falcon 9 rockets to get aloft in 2022 or 2023. It'll hopefully spend the next ten years scanning our atmosphere and oceans to get a better idea about life on this Pale Blue Dot.

"The PACE mission represents the nation’s next great investment in understanding and protecting our home planet. The mission will provide global ocean color, cloud, and aerosol data that will provide unprecedented insights into oceanographic and atmospheric responses to Earth’s changing climate," NASA said of the deal.

"PACE will help scientists investigate the diversity of organisms fueling marine food webs and the US economy, and deliver advanced data products to reduce uncertainties in global climate models and improve our interdisciplinary understanding of the Earth system." ®