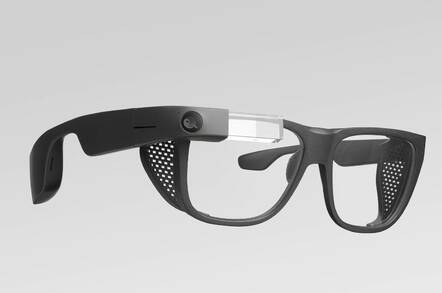 From today, you can now buy a Glass Enterprise 2 - the latest iteration of Google's wearable computer - from a general hardware reseller.

Previously it could only be obtained from an accredited Google supplier.

Google Glass has a chequered history: Launched in 2013, the original concept was augmented reality for everyone. Maps, weather, translations, reminders, photos, access to Google search without having to pull out your mobile: the idea had great promise and the hardware was acceptably small and light. One problem: it was seen as creepy and Google's original term, "Glass explorers", soon became "glassholes" in public jargon. The pilot, aimed at software developers, never made it to a consumer product. Google withdrew it from sale in January 2015.

The company never gave up on the "Glass at work" concept, though, and in 2017 launched Google Glass Enterprise Edition.

Project lead Jay Kothari reported on use cases including mechanics with manuals in their line of sight, assembly workers viewing checklists or sending photos while working on machinery, warehouse pickers getting "real-time instructions about where items have to be placed on carts", or (getting a bit creepy here) healthcare professionals using Glass as a "remote scribe" during consultations.

According to Augmedix, it "uses technology to livestream office encounters to a tech-enabled scribe team in a HIPAA compliant Augmedix facility... remote medical scribes are trained to observe the clinician/patient interaction and extract the salient details needed for medical documentation." You can see Augmedix in action here.

According to Google: "Glass EE2 is conceived mainly as a single purpose tool for Enterprise." The idea of a general-purpose AR assistant has gone. Instead, users are expected to launch an app that "takes over the experience from the moment Glass boots up".

Google claims it has "seen strong demand from developers and businesses who are interested in building new, helpful enterprise solutions for Glass".

This has prompted it to make the EE2 devices available more widely, making it easier for developers to get hold of the hardware, though currently the only listed resellers are Mobile Advance, CDW and SHI in the USA and Canada (we have asked Google about availability in the UK and elsewhere). Typical prices are $1,062 for the "Glass pod" with the camera and computer, plus $139 for the Titanium Band on which to mount it. The price is slightly below the $1,500 asked for an Explorer Edition back in 2013, substantially less if you allow for inflation.

Google Glass has maintained a low profile since its controversial launch. Although this is not aimed at consumers, it is possible that wider availability will reignite some of those earlier concerns. Nobody is likely to object to Google Glass on an assembly line or in a warehouse, but when it crosses over to human interactions it is a harder sell.

On the other side of the argument, the question is whether it will ever be possible to fulfil the promise of the original concept while respecting the privacy of others. ®