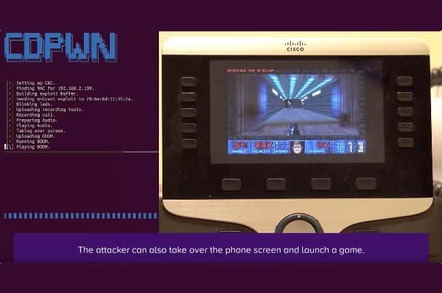 Play Doom on a Cisco phone via CDPwn

Enterprise networking giant Cisco is expected to release a set of software fixes on Wednesday to address five critical vulnerabilities in devices that rely on the Cisco Discovery Protocol, known to its friends as CDP.

CDP is a proprietary Layer 2 data link protocol for gathering information about networked devices. It's implemented in almost all of Cisco's products, including routers, switches, IP phones, and IP cameras.

Armis, the security biz that spotted the aforementioned flaws and privately reported them to Cisco, has dubbed its troublesome quintet CDPwn. The infosec outfit claims tens of millions of devices are vulnerable. CERT is planning to issue an advisory.

"The findings of this research are significant as Layer 2 protocols are the underpinning for all networks, and as an attack surface are an under-researched area and yet are the foundation for the practice of network segmentation," said said Ben Seri, research veep at Armis, in a statement.

Seri argues his organization's findings show that network segmentation can't be relied on to provide security when the network infrastructure itself comes under attack.

Exploiting the CDPwn flaws involves first hacking smart TVs, printers, smart lighting, video cameras, or badge readers that have been put on a segmented portion of a corporate network to isolate them from managed corporate IT gear. The assumption is that identifying and exploiting a vulnerability in one of these typically low-security, unmanaged consumer devices provides a path to exploit the CDPwn flaws and then compromise high-value devices on other network segments by breaking network boundaries.

"Since these devices have no security, an attacker can exploit these devices to get a foothold in the organization," an Armis video explains. "Then, using CDPwn, the attacker can target the switch with a maliciously crafted CDP packet, triggering a memory corruption on the switch, leading to remote code execution."

With control of the switch, network eavesdropping and miscreant-in-the-middle attacks become possible. Also, once a foothold has been gained, the intruder can broadcast a packet to take over all Cisco IP phones anywhere on the network. This could allow Doom, for example, to run on an IP phone. Some might consider this an improvement.

Four of the CVE-listed vulnerabilities are described as a critical remote-code execution holes; the fifth is a denial-of-service bug:

"Enterprises who are currently using network segmentation as their only mechanism to protect Enterprise of Things (EoT) devices from attack, and to protect enterprise computers from being attacked by compromised EoT devices, should rethink their approach," Armis explained in its technical whitepaper. ®