What a terrible result from this year's Super Bowl. Can you believe it? Awful. Yes, we're talking about the tech ads 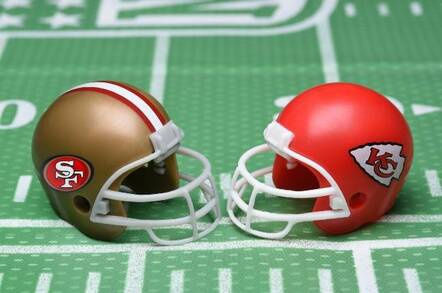 Comment It all looked so good. A stunning third quarter in Sunday’s Super Bowl left the San Francisco 49ers looking like dead certs for the armored rugby trophy. And then it all fell apart: the Niners pulled a WeWork, and got crushed like an orange in a Juicero by the Kansas City Chiefs.

To add insult to injury, the technology giants advertising around the game didn’t exactly cover themselves in glory. Around 100 million people tuned into Super Bowl LIV, the vast majority of them in the US. As such, it's become a tradition for organizations to spend millions of bucks on controversial or unconventional TV adverts during the sportscast, not only to ostensibly be part of the celebration and spectacle but also to reach a fairly captive albeit inebriated audience.

We're going to highlight a few of 2020's worst Super Bowl ads, and, yes, sure, we get that we're embedded them for free for you to watch. So in a way, they've won. But... just be aware we're including them with our arms firmly crossed, and eyes narrowed with all the disappointment we expect from our parents when we try, for the tenth time, to explain what it is we actually do every day.

Verizon's ad was a stunning piece of shamelessness, with Harrison Ford narrating how 5G won’t solve everything – but it will keep firefighters, police, and other first responders safer.

This is from a telco that in 2018 throttled California firefighter data plans at the height of the Mendocino Complex Fire, the largest conflagration in the US state’s history. It killed one firefighter and left four others injured.

Verizon staff had promised the emergency workers an unlimited 4G package, though that proved to be a temporary offer, and their connectivity was thus deliberately slowed after the first 25GB was downloaded. Verizon had better live up to its promises this time.

You can't live without Alexa

Meanwhile, Amazon chose to shame American consumers into accepting Alexa devices into their homes, perhaps channeling legendary US coach Vince Lombardi – whose name adorns the Super Bowl gong – and his saying: “Winning isn't everything, it's the only thing.”

Ellen DeGeneres asks Alexa to turn down the thermostat in her home before asking her wife the brutally disingenuous question: “What do you think people did before Alexa?”

There then follows a montage of painfully unfunny medieval and fantasy-level jokes with quips about fake news. What exactly is the message here? If you want to favorably compare the usefulness of Alexa, you have to go back to the middle of the previous millennium? Alexa doesn't move the needle in terms of productivity until you're in the 16th century? No, Alexa, it's a rhetor... shut up, Alexa.

Perhaps the message is, somewhat insultingly, that without Alexa, you're in the dark ages. Well, I remember, I dunno, 2017 pretty well, and there wasn't an Alexa-shaped hole even then. Personally, I walk over to the thermostat, spend three seconds of my life turning it off, and go about my day. It means I don’t have to deal with a surveillance device in my home nor get into a row with one when it awkwardly doesn't understand what I said and feeds our conversation to an internet serf tasked with transcribing our painful exchange. How did we live before Alexa? Extremely OK is the answer.

Google’s effort wasn’t much better. An elderly man asks the web giant to remind him of all the things he loved about his wife. Wasn’t sure if the Chocolate Factory was trying to appeal to older users or making a play for you telling the ad-slinging business absolutely everything about your life.

Microsoft’s ad agency chose to highlight the work of Katie Sowers, one of the Niner’s coaches and one of the few women in such a role, and used this to push the Surface laptop line – an unfortunate choice considering the game's end result. Maybe the 49ers should have used iPads.

For years now Microsoft has had a deal with the NFL to ensure teams use its fondleslab, rather than Apple’s alternatives. This has led to some anger from coaches who hate the hardware, with one saying he’d rather use a pencil and paper.

All in all, it was a lousy day for fans of football and technology in the San Francisco Bay Area. Better luck next time. ®

PS: I know Amazon and Microsoft are not headquartered in the SF Bay Area. But they have offices here. We can see one from our office space in San Francisco. Stop trying to ruin my angle. The Seahawks suck anyway.