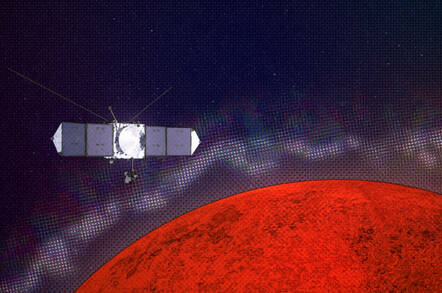 An artist's illustration of the MAVEN spacecraft studying layers of plasma in the Martian atmosphere. Image Credit: NASA Goddard/CI lab

NASA’s Mars-orbiting MAVEN spacecraft is helping scientists uncover the longstanding mysteries of how small clouds of concentrated plasma in Earth's atmosphere interfere with our radio signals.

High up in our home world's ionosphere, at an altitude of around 100 kilometres (62 miles), atoms are ionized by sunlight. This resulting soup of ions and electrons forms a plasma stretching a few kilometers across. These concentrations, known as “sporadic E layers,” have baffled scientists since their discovery more than 80 years ago.

sporadic E layers behave like giant mirrors, reflecting radio waves so that they bounce over the horizon. This causes the signals to interfere with one another, affecting radio communications down on Earth: audio transmissions are distorted, military radars blinded, and so on.

These layers are difficult to study because they form at altitudes that are too high up for aircraft to probe, and too low for satellites to inspect. Suborbital rockets can whiz through the ionosphere to take readings, though it's a rather hit and miss affair: the layers are temporary and decay within hours.

On Mars, however, sporadic E layers are much more permanent. Since NASA’s MAVEN spacecraft can circle the alien dust world at low altitudes, it’s better suited to studying the phenomena than any suborbital rockets on Earth. In fact, MAVEN has uncovered more of these layers on Mars than any rocket has on Earth. The results were published in a Nature paper on Monday.

“It’s the first time we can explore this phenomena,” Glyn Collinson, lead author of the paper and a research associate at NASA’s Goddard Space Flight Center, told The Register. “We want to know the processes of how they form so that one day we might be able to model them or predict them so that we can have more reliable radio communications.”

The effect is illustrated and summarized in this video:

Collinson and his team discovered spots in the Martian atmosphere, where there was a scarcity of plasma particles instead of a concentration. They have described these as “rifts,” something that has never been observed on Earth.

The formation of sporadic E layers is analogous to two tectonic plates pushing against each other on a fault line, Collinson explained. The ions in the atmosphere are pushed together along Earth's magnetic field lines by electromagnetic forces to create clouds of plasma. Just like valleys form when two tectonic plates move away from each another, rifts in plasma layers are found when the electromagnetic forces pull the ions away from each other.

Maven will continue to study the phenomenon, and more details are expected in future papers. ®