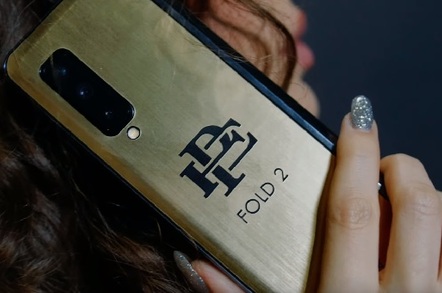 Pablo Escobar was a lot of things. Folk hero. Terrorist. Murderer. Drug kingpin. Revered and reviled in equal measure. Now, almost 30 years after his death, his younger brother is keeping his flame alive – with foldable phones.

Yesterday, Escobar Inc, the company created to manage the Escobar family's assets, announced the release of the Escobar Fold 2.

This is arguably the tackiest phone ever conceived. It's tackier than an episode of Keeping Up With The Kardashians. It's got as much taste as a dry slab of sirloin from one of those god-awful tourist trap Aberdeen Angus Steakhouse restaurants. It's as graceful as a Donald Trump tweet. It's about as subtle as a Melanie Philips column.

Readers: meet the Escobar Fold 2. And what better way to introduce it than with a promotional video showing a bunch of scantily clad women awkwardly gyrating around the phone, as if Victoria's Secret suddenly decided it was going to "do 5G".

Another promo video for the phone features the lingerie-clad lasses destroying an array of Samsung phones with a sledgehammer. Fortunately, they had the good sense to wear protective eyewear, proving even former Medellin Cartel accountants care about 'elf and safety.

The phone itself is shaped like a gold brick. And while that may be a suitable homage to a narcoterrorist who, at one point, amassed a wealth of $30bn, you probably don't want to shove it against your head, lest other people think you're a spectacular bellend.

Canny readers will remember the last effort was outed as merely a rebadged Royole Flexpai – an early foldable handset that attracted more damning reviews than a Nadine Dorries novel. And we'd willingly bet a kidney that the Escobar Fold 2 is an OEM phone with some gaudy marketing attached to it.

In a canned statement, Roberto De Jesus Escobar Gaviria, Pablo's brother and Founder of Escobar Inc, said: "My goal is to become the overstock kingpin of electronical devices this year. All these factories simply have too much technology laying around; nobody is buying anything in China from secondary factories. We cut the prices and give clients direct discounts under the Escobar brand umbrella."

The Escobar Fold 2 is available to buy now. Should you buy it? Absolutely not. There's a reason foldable blowers cost north of a grand. But on a moral point, do you want to feed into a brand that lionises someone responsible for the deaths of hundreds, at one point blowing up a jetliner in a failed attempt to kill one of his political opponents? It's just gross. ®