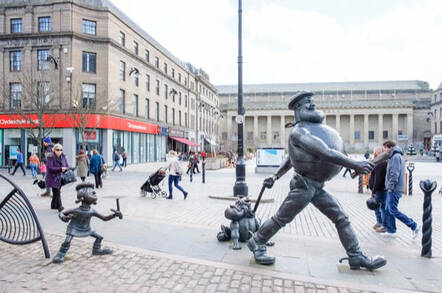 Might as well head out to the city, kids, the college is shut down for the day

A further education college in east Scotland has been struck by what its principal described as a cyber "bomb" in an apparent ransomware attack so bad that students have been told to stay away and reset passwords en masse.

Dundee and Angus College told students not to turn up after the ransomware seemingly downed the entire institution's IT systems.

The outage began late last week and has been ongoing ever since, though the latest internal update to students and staff says services are finally being restored, we have been told by sources.

An update from the college posted on its website said:

To enable us to continue this work, no classes will run on Tuesday 4 February 2020. This includes classes for college students, school pupils, evening classes and also means student interviews will not take place.

However, all students are required to reset their passwords before they can access College systems such as MyLearning.

Dundee and Angus College has about 5,000 registered students. Its campuses are in Dundee itself and a few miles further along Scotland's east coast.

A student affected by the attack told The Register: "We cannot access any college systems... the intranet that contains learning resources for all course materials has been offline for some since Thursday."

Our source added: "I got in on Friday but couldn't get any material out [from college servers]. Loads of my class are worried in case the Graded Unit has been lost, with no way to directly contact college or IT bods... loads of classmates are in panic mode in case work has been compromised or vanished.”

The Graded Unit, we are told, can directly affect students' chances of getting into university.

Principal Grant Ritchie described to local newspaper The Courier what sounds remarkably like a drive-by ransomware attack that began around 3am on 30 January.

"It stopped our system and now we have to get it back," he said, adding: "It's a mischief thing, it wasn't necessarily targeted at us. It's one of these bombs that are just sitting waiting to go off."

The infection appears to be worse than college admins initially thought, with a promise of being back up and running by Monday having passed without IT systems being fully restored.

The impact of the attack is "mass panic worse than the coronavirus", added our source, "because nobody knows anything".

We have asked Dundee and Angus College some questions and will update this article if we hear back. ®

Put that on the side of a bus