January's other AI news summarized for you... by a human... honest 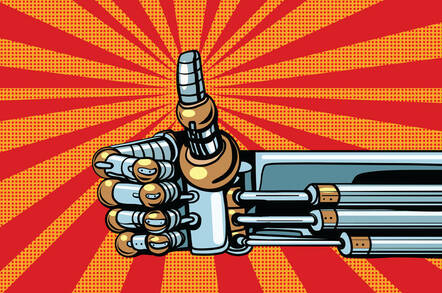 Roundup Let's catch you up on the latest goings on in the world of AI beyond what we've already written about.

Reinforcement learning, a technique used to train bots to perform a specific task through trial and error, was all the rage in the machine learning world. In 2016, DeepMind’s agent AlphaGo beat Lee Sedol, one of the best professional Go players, using a combination of advanced search and reinforcement learning.

Splashy headlines described other games that AI had managed to master: Chess, Ms Pacman, Montezuma’s Revenge, Dota 2, the list goes on. At first, it was pretty exciting but it started to get a little disenchanting when it was just bots playing video games.

Getting physical AI robots to navigate the real world, however, seemed out of reach. The real world was too messy; robots would be thrown off by tiny details in their environment like light conditions.

It took considerable effort to bridge the simulation to reality gap. Folks over at OpenAI managed it but even then it was for simple tasks that weren’t very useful like manipulating a Rubik’s cube.

Now, finally, a real, commercial robot trained in simulation using reinforcement learning really is practical. Engineers over at Covariant AI have successfully developed a robot arm capable of sorting through equipment for Knapp, a German logistics and production company, faster than its human workers.

Dirk Jandura, the managing director of the Obeta warehouse outside of Berlin, told The New York Times that it’s latest all-metal employee “doesn’t smoke, is always in good health, isn’t chatting with its neighbors, no toilet breaks.” Not only is it more efficient, he gushed, it’s also much cheaper than the company’s all-meat employees.

Knapp aren’t about to fire all of its human staff, however, they’re still much smarter and better than Covariant AI’s robot at jobs beyond the sorting tasks - for the moment at least.

Radio broadcasting giant fires hundreds of staff in favor of machines: Here’s another story about AI software taking people’s jobs: iHeartMedia, the radio broadcasting conglomerate that owns the popular station iHeartRadio, announced it was laying off hundreds of employees in an attempt to “take advantage of...AI”.

The restructuring will see AI technology being used for “every market,” apparently. iHeartMedia listed “programming, marketing, digital, podcasts, sales and sales support” as some of the main areas it hoped to modernize.

“iHeart is the rare example of a major traditional media company that has made the successful transformation into a 21st century media company – one with unparalleled scale, reaching 91 per cent of Americans each month with our broadcast assets alone, more than any other media company,” Bob Pittman, chairman and CEO of iHeartMedia, declared in a statement earlier this month.

“We are now using our considerable investments in technology to modernize our operations and infrastructure, further setting us apart from traditional media companies; improving our services to our consumers and advertising partners; and enhancing the work environment for our employees.”

What’s not mentioned in the announcement, however, is that iHeartMedia’s efforts to revamp itself comes at the cost of hundreds of employees’ jobs. The cuts have been described as a “bloodbath,” according to The Washington Post.

Ex-staff said iHeartMedia has been playing around with AI software capable of mixing music, a job traditionally left for DJs.

"They’ve decided to replace a lot of workers, a lot of live shows, with AI … and another DJ in another state, another city, not in Fresno, don’t know nothing about Fresno,” Monisha Mann, a former DJ at B95, an hip-hop radio station owned by iHeartMedia, said during a live video feed on Instagram and Facebook. “I just sat in my car, like, damn. This is it for me. … I just got laid off from something I loved so much.”

OpenAI switches to PyTorch: OpenAI has chosen to build all its deep learning models in PyTorch, the popular framework developed by Facebook.

The Python-based libraries are arguably much more flexible to use and deploy than other frameworks like Google’s TensorFlow. Both are big bonuses in research, where ease and speed are more important than code optimized for production.

“The main reason we chose PyTorch is to increase our research productivity at scale on GPUs,” the San-Francisco research lab said this week.

“It is very easy to try and execute new research ideas in PyTorch; for example, switching to PyTorch decreased our iteration time on research ideas in generative modeling from weeks to days. We’re also excited to be joining a rapidly-growing developer community, including organizations like Facebook and Microsoft, in pushing scale and performance on GPUs.” ®