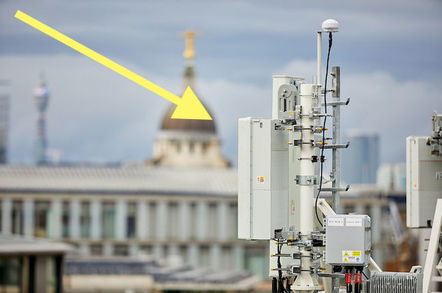 A Huawei 5G base station in London's St Pauls

The British government is set to severely restrict the use of Huawei's cheap kit to a fraction of non-core networks across the UK due to worries about the Chinese vendor's link to China.

A pair of official reports – one by the Department for Digital, Culture, Media & Sport, and the other by the National Cyber Security Centre – accompany today's long-awaited proposed rules on the future deployment of equipment in the UK's 5G and gigabit-capable networks.

Huawei is singled out as an example of a "high risk vendor" that should be kept away from anything important.

To be clear, the proposed guidance and rules fall short of demanding a full ban on these so-called high risk vendors, and instead insist that they should be limited to non-sensitive areas of the network and have their market share artificially limited.

As previously expected, the government reckons communications providers should be legally prohibited from using risky vendors on core network elements. They will, however, continue to be allowed to use such equipment on non-core elements of the network. In the case of 5G, this extends to things like antennas and radio access network (RAN) infrastructure. The guidelines define high-risk vendors as those who pose "greater security and resilience risks."

The Conservative-majority government – which will have to legislate these proposals to enforce them – also suggests limiting providers from using "high-risk" kit in more than 35 per cent of the non-core network. This effectively places a ceiling on Huawei's 5G market share in the UK. Unsurprisingly, shares in rival Nokia soared after the announcement. The proposals also limit providers from deploying "high-risk" equipment in areas that are sensitive to national security, such as near military bases and nuclear power stations. It also prevents their use in safety-critical and safety-related elements in the "critical national infrastructure."

Other European nations limit the locations where Huawei's 5G equipment can be deployed. France, for example, has banned Huawei from the city of Toulouse, which is home of Airbus, as well as Brest, which is home to the French nuclear submarine fleet.

Despite being somewhat of a mixed bag, Huawei has welcomed today’s news. A canned statement from Victor Zhang, vice president of Huawei, stated: "Huawei is reassured by the UK government's confirmation that we can continue working with our customers to keep the 5G rollout on track."

Zhang added: "This evidence-based decision will result in a more advanced, more secure and more cost-effective telecoms infrastructure that is fit for the future. It gives the UK access to world-leading technology and ensures a competitive market."

This news is perhaps one of the few morsels of good news for Huawei in what has otherwise been an incredibly challenging 12 months. In July, it found itself subject to inclusion on a US government entity list, which prohibited US-based companies from doing business with it. This had a dramatic effect on all elements of the company, most notably its handset business, which was cut off from Google's software, as well as the latest chip designs from Arm.

And, over the past few months, it has lived with the sword of Damocles hanging precariously over its head, as the US government aggressively lobbied Downing Street to ban Huawei in its entirety from the UK 5G network.

But above all, it's good news for Three, EE, and Vodafone, which each invested heavily in Huawei's equipment. A major factor behind its appeal was the fact that Huawei's equipment is typically cheaper than those of its rivals. The Wall Street Journal claims Huawei is the recipient of massive state subsidies – an allegation which Huawei vehemently denies.

Any blanket ban would have forced the three Huawei-using networks to remove and replace existing equipment with more expensive alternatives, not long after they'd collectively spent over £1.4bn on acquiring spectrum rights. This would also undoubtedly hamper the nationwide deployment of 5G connectivity, which is a major priority for UK Prime Minister Boris Johnson's government.

It's also worth noting that OpenReach uses Huawei's gear on its VDSL2 FttC infrastructure, with ThinkBroadband estimating the BT-owned network provider has over 64,000 Huawei cabinets across the UK, spread across rural and urban areas. It'll be interesting to see what happens next. Networks with more than 35 per cent non-core Huawei infrastructure will be in a sticky position. Do they increase the pace of 5G deployment, diluting the share of Huawei-made gear? Or do they retire existing Huawei masts and replace them with alternatives from Nokia, Ericsson, or Samsung?

And as the UK is set to leave the European Union, and potentially embark upon a closer trading relationship with the US, one can't help but wonder what this means for the so-called Anglo-American "special relationship".

Already, today's news has caused dismay among the more hawkish members of the US's Republican Party, with former Speaker of the House of Representatives and close Trump ally Newt Gingrich describing it as "an enormous strategic defeat" for the US.

British decision to accept Huawei for 5G is a major defeat for the United States. How big does Huawei have to get and how many countries have to sign with Huawei for the US government to realize we are losing the internet to China? This is becoming an enormous strategic defeat.

Liz Cheney, Wyoming's sole house representative and daughter of former Vice President Dick Cheney was even more damning, accusing Boris Johnson of having chosen "the surveillance state over the special relationship," and having rejected "the cause of freedom."

Elise Stefanik, Republican congresswoman for New York's 21st district, described today's move as "wrong, dangerous, and a grave shortsighted mistake." She urged congress to "work on a bipartisan basis" to push the UK to reverse its decision. ®