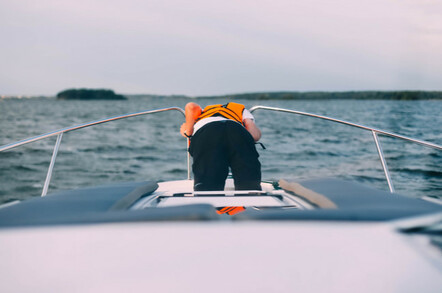 Roundup Welcome to another roundup of the Microsoft news you might have missed over the last week, from acronym excitement to Windows 10 updates and Teams-wielding rowers allowing Redmond to stick its oar in.

Atlantic rowing duo Anna and Cameron McLean have demonstrated that long-distance oar draggers have an unquenchable thirst for hardship. Not satisfied with spending weeks at sea in a tiny boat, the pair have had to endure blisters, bruises, sleep deprivation and "space food" that would make even the hardiest 'naut say "steady on, people."

How to make things even harder? How about using Teams for communication purposes while at sea?

The duo, who rowed from the Canary Islands to Antigua, insisted (via Teams, of course) that the tool had been "crucial" for keeping in touch.

Anna McLean heaped praise on the Microsoft product, saying: "Teams has helped us navigate the best and most direct course" before adding she'd found it simple to set up once the satellite phone had done the all-important connectivity stuff.

Brother Cameron did not comment. One can but hope this was because he was too busy rowing away rather than, you know, using Slack or something.

Snark aside, we're delighted to note that the siblings arrived safely at the finish line over the weekend, having completed the race in 43 days, 15 hours and 22 minutes. A remarkable achievement.

The rowing, we mean, not getting Teams to reliably log in. For some, the latter challenge can occasionally be insurmountable.

We're investigating a networking issue that may be preventing some users from accessing Microsoft Teams. More details can be found in the admin center under TM202028.

Microsoft has removed the last of the safeties on Windows 1909, aka 19H2, aka the November 2019 Update, aka Captain Lightweight. It's there for anyone with a relatively recent version of Windows 10 and a yearning to click that "Check for updates" button.

Compared to the delights of 2018, 2019's Autumn treat was a considerably minor, although for those on Windows 10 1809, the update may start slithering onto your machine by itself since the end of service for the problematic release is just months away for all bar Enterprise and Education editions.

Kindly Microsoft will "automatically initiate a feature update" for more 1809 devices in order to keep "those devices supported and receiving the monthly updates that are critical to device security".

While users can hold things off for a while if they wish, there will be a sigh of relief within the halls of Redmond once those on 1809 have marched into the sunlit uplands of the Windows 10 November 2019 Update.

While dark mutterings of "browser hijack" were heard following the arrival of a Microsoft Search extension in Chrome, lurking in the noise was news of the rollout of Acronym Search.

Since El Reg is not an exclusively Office 365 shop (we have, after all, been known to flirt with LibreOffice, among others), Vulture Central is not subject to the all-seeing eye of Microsoft Search. For those who are, Microsoft has good news.

The Windows giant claims that 2-3 per cent of all searches are from staffers hunting for the meaning behind the acronyms of their employer. "A simple search on Bing," the company intones, "will reveal common definitions from public sources — and your organization's unique definitions with Microsoft Search."

Readers will be delighted to note that TITSUP, BOFH and PFY can be found just as easily via the likes of duckduckgo.com if Bing isn't your thing.

Having made the go-live release of Azure Functions 3.0 available in December, Microsoft announced that the cloudy tech had acquired the Generally Available tag last week. That should have made it the default, according to the work items list for the platform, but at time of writing, creating a new function through the Azure Portal kicks things off with version 2 of the runtime by default.

It appears that the new defaults will take a few days to roll out. A friendly engineer told us that version 3.0 would be the default by the end of the week; just squeaking into the self-imposed January 2020 deadline. The gang has also been working on updating the client tools.

For now, however, a swift click will shift things to version 3.0, replete with .NET Core 3.1 and Node 12 targeting support. Not that the old versions are going away – the Azure Functions gang repeated its promise that those sticking with version 2.0 or even 1.0 would continue to receive security updates and patches. There'll be at least a year's notice before the deprecation of a major version.

Your Phone: Ignore the lack of iOS support and check our 2,000 Android photos!

A month after Windows Insiders were given the headsup, Microsoft's Your Phone team reminded users last week that instant access to the last 2,000 photos was now supported.

You asked, we listened! The #YourPhone app now gives you instant access to your last 2000 photos! 📸📷🙌🥳 https://t.co/O4uVnBwibI

Great news for anyone unable to work out that pesky USB mass-storage connection nonsense.

Conspicuous by its absence in the announcement was integration with Apple devices. Though Android hardware has gained all manner of integrations, including messaging, calling and screen sharing, iPhone users have languished with, well, not much.

As ever, don't hold your breath. While partner director of Program Management for Mobile and "X-Device Experiences" Vishnu Nath could barely contain his excitement about the latest Android emissions from soon-to-be-Android-Phone-maker Microsoft, for iOS (other than Edge) the tumbleweed has continued to trundle across the barren landscape. ®