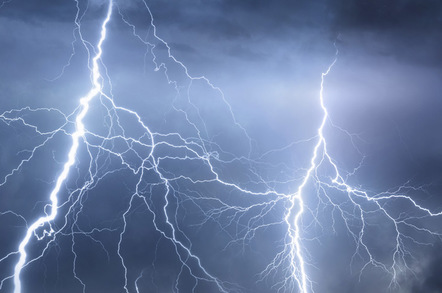 Who, Me? As the weekend recedes, be glad you didn't find yourself in need of a fresh change of clothes like the contributor of today's entry into the Who, Me? hall of shame.

Today's story comes from a reader the wondrous Reg name maker-upper has elected to call "Miffy" and concerns some Teutonic exploits that left our reader tired, sweaty and not just a little whiffy.

Our story takes us back nearly a quarter of a century, to when Windows NT 3.51 had been given a good thwacking with the Windows 95 stick and grown a Start Menu to replace, or augment, the beloved Program Manager.

"The world," recalled Miffy, "looked decidedly rosy, which might have been why my then employer let my 25-year-old neophyte self be the technical lead for our migration to NT4."

Up until then the company had been trotting along quite happily on Windows 3.1 PCs. Novell Netware servers, replete with interplanetary levels of uptime, provided file and print services.

The company saw an opportunity with the arrival of NT4 (for Server and Workstation) to have the same OS on Server and PC. "Oh, the innocence of those late nineteen-nineties," remembered Miffy.

There were two problems. First, the company lacked the sheer womanpower to shift all the PCs to NT4 first and heck, as you can imagine, hardware that ran Windows 3.1 would be less than impressed to see NT4's wobbly posterior bearing down on it. The wonder-OS needed at least 16MB (preferably a bit more) and a decent CPU while Windows 3.1 would toddle along with 1 or 2MB and a considerably lower class of CPU.

The team decided to roll out the domain ahead of the PCs. The first item on the checklist was that file server. After all, how hard could it be?

"Now," said Miffy, "I could have made plans for the roll out of the risible MSCLIENT for DOS to our estate, but the TCP/IP stack stubbornly failed to LOADHIGH resulting in even crapper PC performance." Not ideal.

However, "I was charmed by a little thing called File and Print Services for NetWare. Essentially this ran on your Windows NT4 server and made it appear as a NetWare File Server."

Miffy tried it out at the first few sites and all went well. "Flushed with success I rocked up [to the site] in a sizzling German August in my best summer dress."

"So was I, but I had a schedule to keep and with some trepidation we started migration work."

Come cut-over time, the duo took a stroll around the facility and realised, to their horror, that PC after PC was unable to start Windows. The culprit was a missing Windows directory on the file server.

Miffy duly ensured it had been migrated, only to discover that there was more than one "common" Windows directory in use. By the time 3am rolled around, and with half a dozen conflicting directories identified, Miffy called it a day, suggesting that the pair put things back to how they were.

"Otto was gutted, not (god bless him) because of the inconvenience, but for fear that my fledgling career would be damaged by his unmigrated site. I just wanted to get some sleep."

It took another two site visits to complete the migration, with Miffy racing to keep ahead of Otto's unerring ability to stumble into each and every NT4 pothole. She and Alta Vista became very good friends.

But at last it was done. "Until that Thursday in late November when Otto called me up."

The file server was very very poorly. This meant that none of the Window 3.1 PCs could actually load the graphical user interface. And even if they could, all their apps were also on the file server.

Thanks to the power of remote access, Miffy had a poke around the server. Odd. The server was still happily talking to the NT4 Workstations.

The File and Print Services for Netware was stopped. A hopeful restart simply resulted in a visit from Dr Watson. A reboot saw a few seconds of life from the service before the good Doctor again made an unwelcome house call.

No problem – the team could restore from a backup, right?

Er, no. "It was then that Otto informed me he had deselected the backup of system state some weeks ago 'to save space'."

Her plans for the weekend shredded, Miffy was shoved onto the last flight out to Germany to sort the problem out. Naturally, it would have to be month-end, and so unexpected downtime was very much verboten.

Otto greeted Miffy in the same way a drowning man receive a lifeboat.

"I rebuilt the server by hand," she recalled, "resurrected the shares from my notes and restored the data from tape."

It was all going swimmingly until the pair added the print drivers. That pesky Netware service really didn't like them and promptly fell over. By trial and error, Miffy worked out that it was an HP driver causing grief and, alas, "90% of the printers were HP."

"How it had ever worked in the past was questionable."

As Saturday became Sunday she had a brainwave. Not brilliant. A tad quick and dirty. But it should work.

"Windows for Workgroups 3.11 had TCP/IP support as a VxD (so loaded in memory above 640K), so we could get by using just Microsoft networking (not NetWare)."

So, yet another shared Windows directory was set-up: "This time with Windows for Workgroups 3.11, Lotus SmartSuite and other line of business software installed."

With breath held, the PCs were tested.

"One by one our crap PCs with Franken-client combination of DOS and Windows drivers booted into something not entirely unlike what they’d had before."

"Otto was ecstatic. With limited clothing packed in a hurry I was starting to test the limits of my bodyspray."

Monday arrived and it was clear that Miffy, reduced now to a pair of jeans and t-shirt normally reserved for nightwear, had saved the day as users successfully logged in.

"The managing director came to thank me for my hard work," she recalled.

"And gently suggested they could buy me some clothes."

Ever cobbled together your very own Frankenclient of DOS and Windows, or Linux and, well, pretty much anything else? Yelled "it's ALIVE!" when the UI creaked into life? We certainly have, and you should share your tales of bodgery in an email to Who, Me? ®