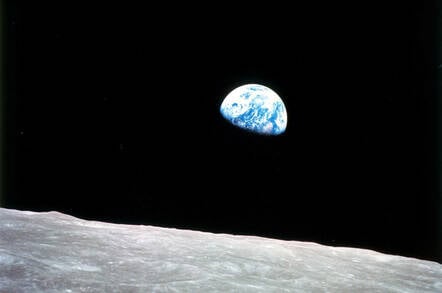 "Earthrise": Taken aboard Apollo 8 by Bill Anders, this iconic picture shows Earth peeking out from beyond the lunar surface as the first crewed spacecraft circumnavigated the Moon. Image: NASA

There is every chance that Lucy is about to whip the football from Charlie Brown once again as a fresh NASA Authorization Bill was introduced with some significant changes to the infamous 2024 boots-on-Moon goal.

The most eye-catching change (PDF) is that the first lunar landing could be pushed to 2028. A crew would then orbit Mars by 2033 as an "interim goal" ahead of a landing on the red planet.

To be fair, 2024 was always an ambitious date. It is now 2020 and NASA has only just got the first Space Launch System (SLS) core stage vertical in a test stand. 2028 is more in line with earlier estimates from the agency.

However, the bill also removes the Gateway, a small space station intended to orbit the Moon, from the Lunar Landing Mission Architecture in favour of just loading up an SLS booster with everything needed to land and firing the stack at the Moon.

Shades of Apollo indeed and, despite the bill's brave words, not particularly sustainable. It also calls for two crew lunar landings a year once the first has been achieved. But a continuously crewed lunar outpost or in-situ resource utilisation on the surface? Not part of the "Moon to Mars" programme.

For many, the emphasising of getting a crew to Mars by 2033 will be welcome, even if just to orbit initially. NASA, however, will have to ponder how to build such a transport vehicle.

The Gateway, now not required for Moon missions, pops up as the "Gateway to Mars" in cis-lunar space or at a Langrangian point and will be a testbed for Martian shenanigans.

Still, at least there will be smiles all round at Boeing. The bill also directs the Administrator to get the Exploration Upper Stage of the SLS (11.5m long, 8.4m wide and with 4 RL-10 engines at the base) complete in order to unlock "the full range of launch capability and performance" of the monstrously delayed launcher.

The International Space Station is also extended to 2028, and other science missions preserved.

Back in 2018, the space agency was directed to return Americans to the Moon by 2024. Jim Bridenstine, head of NASA, insisted that this would not be just another re-run of past NASA grand plans for human-tended deep space exploration. This time a crew would definitely bounce around on another heavenly body.

At the time, Bridenstine described the plans as "not Lucy and the football again". For those unfamiliar with the Peanuts strip penned by the late Charles Schulz, the phrase refers to the habit of one character, Lucy, whipping away a football just as another, Charlie Brown, is about to kick it. The latter is left winded and pondering his choices in life.

The strip is much like NASA as programme after programme was cancelled over the decades, often at the whim of changing administrations.

It is important to note that this is a just an Authorisation Act (due for markup on 29 January) so can do little to deflect NASA from its course, the mast of which both the US Administration (in the form of "Iron" Mike Pence) and Bridenstine have nailed their colours.

However, what it does too is show what is on the minds of lawmakers.

There could, therefore, be choppy waters ahead for that 2024 goal as well as NASA's dreams of doing substantially more than a repeat of Apollo's flags-and-footprints of half a century ago. ®