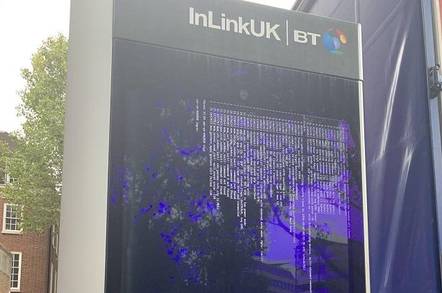 Smart phonebox firm InLinkUK went bust in December. Now, thanks to a statement of financials issued by administrators Duff & Phelps, we can peer into the troubled firm's accounts.

InLinkUK has the grand ambition of replacing phone booths across major Brit cities with its slender InLink devices, which provide "ultrafast, free public Wi-Fi, phone calls, device charging and a tablet for access to city services, maps and directions" all supported by advertising.

The admin report explains the firm's surprise demise, which is largely attributed to the ongoing difficulties with expansion, as well as media buyer scepticism of the digital advertising platform.

It cites delays in receiving planning permission in several key markets – specifically Westminster, Liverpool, Bristol, and Edinburgh. Local authorities were concerned that the InLink booths would contribute to urban clutter, and harm the "aesthetic" of the locales in which they were placed. Compounding this problem were fears that the booths could contribute towards criminality. In certain parts of London, InLinkUK was forced to suspend its complimentary phone service as those associated with the drug trade used them to anonymously execute deals.

On 13 January, Islington Council issued an objection to one InLink booth deployment. The primary cause of concern was the technology used by InLinkUK to mitigate against drug-related calls, which the council felt was unsatisfactory, and could prevent users from making legitimate calls – such as those to taxi companies. It also took issue with InLinkUK's failure to provide concrete statistical data on the efficacy of its system, which is, for all intents and purposes, a black box.

The woes didn't stop there. InLinkUK's booths were costly to procure and deploy, and crucially came with ongoing maintenance costs that needed to be met in order to prevent the system from falling into disrepair, or being vandalised. The statement of financials shows that in the weeks between 26 November 2019 and 20 January 2020, it paid £105,000 to landowners merely to gain access to its booths, in order to perform cleaning and maintenance duties. These charges are referred to as "ransom" in the financials – a technical term that has nothing to do with Somali pirates.

InLinkUK hoped that media buyers would line up, but that didn't happen, partly due to scepticism regarding the advertising technology, which was relatively new to British streets. Its troubles were compounded further by a flurry of rivals, all of which wanted to exploit the same loophole in UK planning law initially used by InLinkUK to deploy its booths, which saturated an already-scarce market. Westminster Council was particularly inundated with planning requests for new ad-driven phone booths, and said that had it approved them all, there would be one every 15 metres down Edgware Road.

BT acquired the entire assets of InLinkUK in late December. Although the telco was associated with the firm, it was merely a client and supplier, with the equity held between ad firm PrimeSight and Intersection, which pioneered the InLink booths in the United States. With a new deep-pocketed owner, the future looks a little brighter for staff.

The Register has contacted BT and Duff & Phelps for comment, and will update this article if we hear back. ®