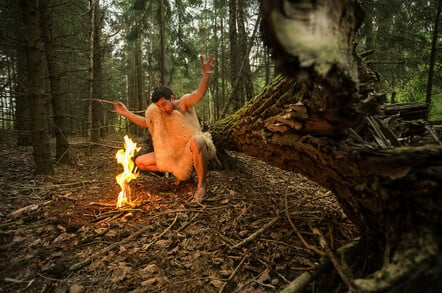 Never one to hide its light under a bushel, Google came out swinging with some seriously inflated technology claims at the World Economic Forum last week.

Sundar Pichai, CEO of Google's parent company Alphabet, told the rich people's talking shop: "AI is one of the most profound things we are working on as humanity, it is more profound than fire or electricity or any of the other bigger things we have worked on."

Let's unpack that for a moment. The Register is unsure how "we" have worked on fire. We assume this means bringing fire under control for human benefit, which was possibly first done about 750,000 years before anatomically modern folk arrived on the scene.

Fire enabled cooking let early human species get more calories from what food they could find, and as such helped brain development. It also freed up time from hunter-gathering to allow people to develop tools.

AI, on the other hand, tells you what film you'll want to watch next. Though its applications are obviously diverse and the technology is continually improving, the jury is out on its wider impact.

AI is also scary, as devotees of the Terminator franchise will no doubt testify. But Pichai labels himself a "technology optimist", which roughly translates as "we make billions of dollars selling technology and we promise you there is nothing to worry about".

Rather than make bold comparisons to fire or electricity, SAP co-CEO Jennifer Morgan jetted into Davos to proclaim that "experience is the new battleground".

The Reg notes that by "new", she means something many companies have been talking about for at least three or four years.

Still, she took the time to wade through some ready-mixed metaphors to elucidate how "the disruption that we see happening for a lot of traditional companies is happening in the experience gap, meaning what businesses think they are providing is very different from what consumers want or are experiencing".

She offered up iPad-strapped-to-an-exercise-bike manufacture Peloton as a company that was "stepping into" another's "experience gap". Viewers of the slightly unhinged "Peloton wife" promotional video may beg to differ.

Meanwhile, IT services behemoth HCL Technologies CEO C Vijayakumar was made chairman of the IT Industry Governors Community of the World Economic Forum.

"In today's world where technology is at the heart of virtually every individual, social, policy and corporate action... the very centre of human progress, it is critical that the IT Industry remains a beacon of responsible leadership," said Vijayakumar, proving once and for all that technology CEOs live in a world uninhabited by irony.

As anyone who has watched the industry for a number of years will know, the future doesn't change; it will always be better than the past, so long as you keep spending money on technology. ®