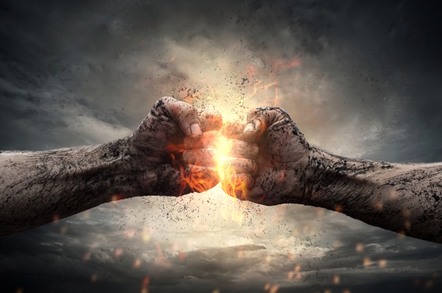 Updated Xerox is done playing mister nice guy – the company has named a slate of directors it wants to shoehorn onto HP's board to spearhead its £33bn hostile takeover bid.

The copier giant will nominate 11 directors at HP's upcoming shareholder meeting in an attempt to gain control of the company's 12-person board. The list includes former senior directors at Aetna, United Airlines, Hilton Hotels, Novartis and Verizon.

Xerox has been chasing its much larger rival since November, offering $33.5bn or $22 per share. HP has so far refused to play ball, thrice rebuffing Xerox on the grounds that its offer "significantly undervalues" the business.

The nominations signal a more aggressive approach from Xerox – the company previously warned things were going to get nasty – pressuring HP to negotiate a deal. A vote on the nominees could act as a proxy referendum on the proposed merger, and installing several directors more favourable to it will help.

"We believe HP shareholders will be better served by a new slate of independent directors who understand the challenges of operating a global enterprise and appreciate the value that can be created by realising the synergies of a combination with Xerox," CEO John Visentin said in a statement.

HP responded by calling the nominations "a self-serving tactic by Xerox to advance its proposal, which significantly undervalues HP and creates meaningful risk to the detriment of HP shareholders".

El Reg has asked HP to confirm the exact date of its shareholder meeting, which is due in the summer. The deadline for the nomination to the company's board is Friday 24 January.

Xerox executives have argued that a merger would revive both companies, and create $2bn in synergy savings.

But HP believes a merged company would carry too much debt. It also raised concerns about Xerox's business strategy, citing a nearly 10 per cent drop in revenue in 2019. ®

HP has sent The Register the following statement:

"We believe that Xerox’s proposal and nominations are being driven by Carl Icahn, and his large ownership position in Xerox means that his interests are not aligned with those of other HP shareholders. Due to Mr. Icahn’s ownership position, he would disproportionately benefit from an acquisition of HP by Xerox at a price that undervalues HP," it said.

"Mr Icahn has meaningful influence over Xerox and its Board of Directors given this ownership position; the role he played in the appointment of Xerox’s current CEO, who is a former Icahn consultant; and the ties Mr. Icahn has to members of the Xerox Board, including Xerox’s Chairman, an Icahn employee."

"The HP Board is unwavering in its commitment to HP shareholders and will continue to take all appropriate actions to advance and protect HP shareholders’ best interests."