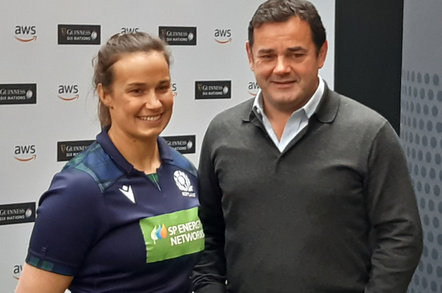 New tech-driven Six Nations stats will "show you which teams are really clinical" at making line breaks inside the opposition's 22, England rugby legend Will Carling has told The Register.

The 59-time England captain spoke to El Reg at the launch of the Guinness Six Nations, the premier international tournament in Northern Hemisphere rugby.

Amazon Web Services has developed a handful of new stats for broadcasters to use during the championships. Among them are a kick success predictor, how many times a team gets inside the opposition's 22-metre line, ruck and turnover location analysis, a dominant tackle counter and analysis tool and a "metres made" counter.

Inevitably these are all connected to AI/machine learning for the data-crunching but AWS is keen to present this as "near real time" stats analysis.

Readers who are not rugby fans can find a simple explanation of the game here. You might need it handy while reading the rest of this article.

The 22-metre line is seen as a critical marker: if an attacking team gets the ball across the 22, they are close to scoring a try and the pressure is on the defending team to stop that movement, regain possession of the ball and clear it upfield to give themselves some breathing room before going back on the attack.

AWS's funky 22 counter, said Carling, is not just about "how many times [a team] has entered the 22" but is instead about "how many points are scored in the 22. So basically there's no point just getting into the 22. The really good teams in winning games – when you get in the 22 – [comes down to] how clinical are you?" he said. "How many line breaks do you make in the 22, how many are converted into points? I think that's a really, really good stat which shows you which teams are really clinical, which teams are converting their chances" into points.

In a statement, AWS said: "The 22 entry will also be calculated for every phase of play, and not simply for crossing the 22m line on multiple occasions in a phase."

As for rucking, this is a challenging occasion for humans to figure out what's going on, let alone machine-learning computers. A ruck is one of those rugby occasions where everyone descends into a pile of writhing bodies with the ball buried somewhere underneath.

Carling said AWS's new statistics would look at "turnovers, stealing ball on rucks... and which areas of the pitch" these movements happen in. He added: "Rugby, like any sport, is about momentum, turnovers, rucks, that's when you're generating momentum, dominant tackles, that's when you're stopping momentum and stealing ball. People haven't had that insight before. That'll show you which teams are better at keeping momentum going and disrupting [their opponents'] momentum."

Data gathered by humans and crunched by… you guessed it

Pierre Visser of Stats Perform, AWS's partner in this rugby venture, told El Reg that the raw data was collected by humans watching live video feeds of the match – in essence, clicking a button whenever a certain event happens on the pitch.

He said: "Rucks have way more data and definitions than people realise," adding that they try and capture "every single different event that a player can do at a breakdown; protect the ball or try to steal the ball, picking up." He continued: "The outcome of rugby from the coach's perspective is how do you protect the breakdown, a key aspect of winning the game. Breakdown success, especially in red area for opposition, brings opportunities."

AWS's Steven Bryen chipped in: "It's not just [collecting] raw data but training a model to do things like kick prediction. Take realtime data of where the kick is, match data of 'success of kicks so far', then we take historic data such as the form of that player and their success over a tournament," he said. "We've trained this ML model to create a prediction of whether that kick, in real time, as he's stepping up to take the kick – is he going to be successful?"

'Incredibly basic compared to what they have now'

We're not sure what Wales kicking legend the Ginger Monster (now Wales' kicking coach) would have made of these stats back in his day.

When we asked former England captain Carling how all this tech compared to his rugby-playing heyday, he said: "Basically it was visual: watch games, analyse games, so in that sense we relied purely on the visual analysis and so you would get a number of clips, about 'this is how teams played, these were their strike moves.' Incredibly basic compared to what they have now."

"But," he added, "you know, that's part of the development of the game. Teams have access to this information: what makes this so exciting is that fans haven't. This is the first time we started to get detailed analysis that fans will be able to see."

Will Carling played for England in the late '80s and early '90s, captaining the side at the age of just 22. He led England to consecutive Grand Slam wins, repeatedly beating every other team in what was then the Five Nations, before Italy joined the tournament in 2000. Like many rugby union internationals from the immediate post-professionalisation era such as fellow England cap Jeremy Guscott and Wales' Jonathan Davies, Carling is now a rugby pundit.

The Six Nations kicks off at 14.15pm on Saturday 1st February in Cardiff's Millennium Stadium with Wales v Italy. ®