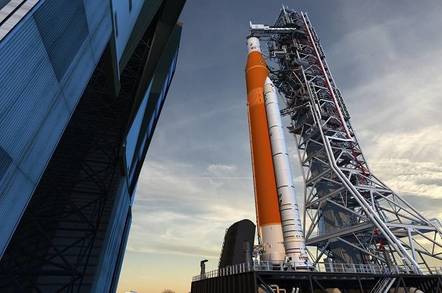 Coming soon to a launchpad near you? (if you live in Titusville)

Engineers have lowered NASA's monster SLS core stage into the B-2 Test Stand at the agency's Stennis Space Center.

NASA Administrator Jim Bridenstine was keen to share the good news with rocket fans as the massive booster took another tentative shuffle toward launch.

The team has successfully lowered the @NASA_SLS core stage in the B-2 Test Stand @NASAStennis and is beginning final installation and hard mate, which will consist of 4-6 hours of detailed alignment. Should be done this evening! pic.twitter.com/giC8Una8NC

Once the booster has been properly aligned and mated to the venerable stand, engineers can get cracking with the of business of testing the thing ahead of shipment to Florida for the long-dreamt of launch to the Moon.

Originally called the Mississippi Test Facility (MTF) back in the day before being renamed the National Space Technology Laboratory (NSTL) in 1974 and finally to the Stennis Space Center (SSC) in May 1988, the facility has a storied history. The B-1/B-2 Test stand was built in the 1960s to test the first stage of a Saturn V with all five engines running simultaneously. 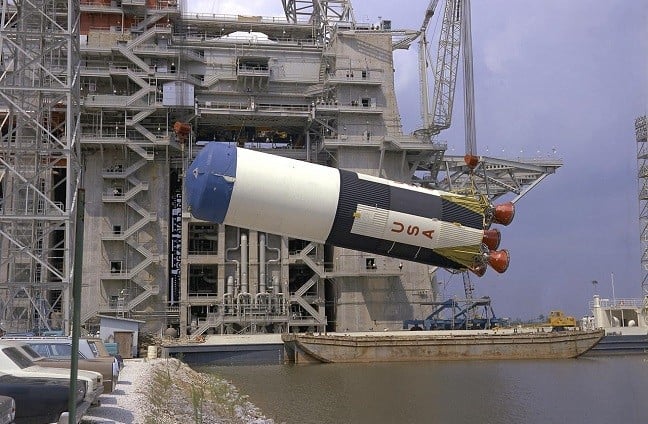 The B-2 stand has since been refurbished for SLS core stage testing, which will take place over the coming months and include an eight-minute-long firing as part of the "Green Run".

The erection comes as NASA's Exploration Ground Systems (EGS) team rehearses lifting and stacking pathfinder segments of the solid rocket boosters that will provide extra thrust to the SLS on lift off.

While the segments are inert this time around, they mimic the weight and centre of gravity of the real thing. The finished pair of stacked boosters, when built with active segments, will generate 3.6 million pounds of thrust each and stand 177 feet tall (PDF)

The solid rocket boosters, like the engines of the SLS, are derived from the Space Shuttle program. They have been extended to five segments rather than the four of the shuttle era. Also like those repurposed shuttle engines, NASA won't be trying to recover the spent boosters, having deleted the parachutes familiar to shuttle fans.

As that first launch nears, the flight segments will arrive by train to Kennedy from Northrup Grumman's Utah facility and be stacked on the mobile launcher within the vehicle assembly building. The SLS core stage will then be lowered onto the mobile launcher and mated to the boosters.

It should make for quite a sight.

The first SLS, carrying an uncrewed Orion and 13 shoebox-sized satellites, might eventually launch in 2021. NASA reckons that at 8.8 million pounds of maximum thrust, the behemoth will be 15 per cent more powerful than the Saturn Vs that have spent the last few decades gathering dust in museums. ®