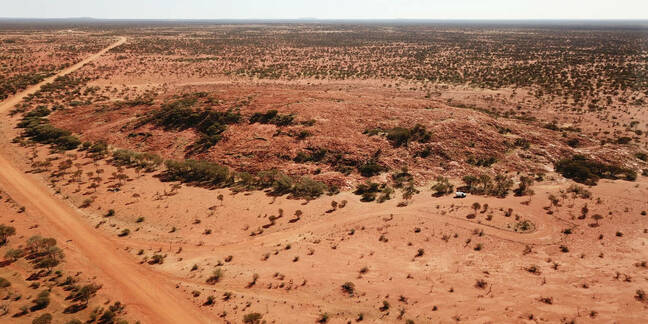 Yarrabubba crater ... thanks for nothing

Pic Scientists studying minerals in the Yarrabubba crater in Western Australia have confirmed the giant pit was formed when an asteroid struck Earth 2.229 billion years ago, making it the oldest impact site yet found on our planet.

“Yarrabubba, which sits between Sandstone and Meekatharra in central WA, had been recognised as an impact structure for many years, but its age wasn’t well determined,” said Chris Kirkland, a professor at the school of earth and planetary sciences at Curtin University down under.

Kirkland and his colleagues decided to nail down the precise age of the crater by analyzing different minerals that formed through a process known as “shock recrystallisation”. Samples of zircon and monazite displayed deformation patterns hinting that they were formed in environmental conditions brought about from events like asteroid impacts.

“This result establishes Yarrabubba as the oldest recognized meteorite impact structure on Earth, extending the terrestrial cratering record back [over] 200 million years,” according to a paper by the team published in Nature Communications on Wednesday.

The academics also found tantalizing evidence that the impact may have increased global temperatures to melt the glaciers thought to have completely covered the planet at the time – the so-called Snowball Earth.

“The age of the Yarrabubba impact matches the demise of a series of ancient glaciations,” said Nicholas Timms, co-author of the paper and an associate professor at Curtin University. “After the impact, glacial deposits are absent in the rock record for 400 million years. This twist of fate suggests that the large meteorite impact may have influenced global climate.”

Numerical simulations of the impact suggest that the blast could have vaporized the water locked in the ice covering Earth to release up to 87 trillion kilograms of water vapour into the atmosphere. As a greenhouse gas, the water vapour would have absorbed and emitted thermal energy to raise temperatures globally.

At 2.229 billion years old, the Yarrabubba crater, a 70-kilometer (~43.4 mile) wide hole, is older than the Vredefort crater in South Africa by 200 million years. The Yarrabubba impact was probably not created from the first asteroid to ever hit Earth, however. Impact records are patchy and some craters may have been lost to shifting tectonic activity or erosion, as the research paper noted.

Piecing together the evidence is important as it helps scientists understand how impact events like the one in Yarrabubba might have affected the atmosphere, oceans, and life on Earth, and what effect future strikes may have. ®