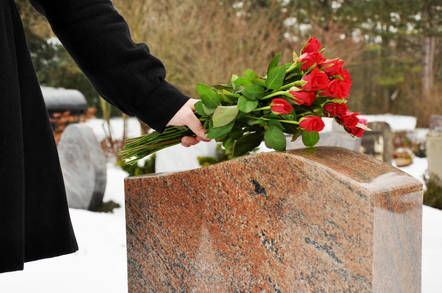 Like the unfortunate soul who finds himself being loaded onto a cart of plague victims in Monty Python and the Holy Grail, a bloke from Forfar in Scotland has had to declare himself "still alive" after finding his name on a headstone in a local graveyard.

Speaking to Dundee-based newspaper The Courier, 75-year-old Alan Hattel said his social life had shrivelled up like one of the cemetery's more permanent residents – and now he reckons he knows why.

"People think that I'm dead," he sniffed. "My phone hasn't rung for three or four months. I've been confused by it all but now I know why nobody has been calling.

"I don't even want to be buried – I plan to be cremated."

Could it be that there's simply another Alan Hattel who sadly perished in the Angus market town? Not unless he, too, was married to a woman called Berta, whose name also appears on the grave marker.

The retired welder blames his ex-wife for the mixup, claiming she bought the plot and had the headstone erected so they could be buried together.

Alan, who has two kids with his erstwhile squeeze, declared: "I've never, ever said I wanted to be buried alongside my ex-wife."

What's even weirder is that the pair went their separate ways 26 years ago. "There's no animosity but I'm struggling to take it all in," said the baffled living man.

He added: "To find out you have a gravestone in a cemetery while you are still alive isn't something that happens every day." It sure ain't, Al.

The paper was unsuccessful in its attempts to contact "Berta" but was later told: "This is a family matter being dealt with privately."

So, old boys of Forfar, pick up the phone. Alan's not dead. In fact, he feels happy and is waiting for your call. ®