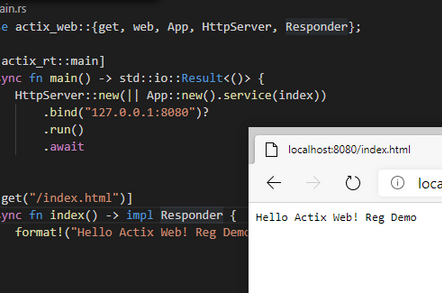 Developing a web application with Actix

The maintainer of the Actix web framework, written in Rust, has quit the project after complaining of a toxic web community - although over 100 Actix users have since signed a letter of support for him.

Actix Web was developed by Nikolay Kim, who is also a senior software engineer at Microsoft, though the Actix project is not an official Microsoft project. Actix Web is based on Actix, a framework for Rust based on the Actor model, also developed by Kim.

The web framework is important to the Rust community partly because it addresses a common use case (development web applications) and partly because of its outstanding performance. For some tests, Acitx tops the Techempower benchmarks.

The project is open source and while it is popular, there has been some unhappiness among users about its use of "unsafe" code. In Rust, there is the concept of safe and unsafe. Safe code is protected from common bugs (and more importantly, security vulnerabilities) arising from issues like variables which point to uninitialized memory, or variables which are used after the memory allocated to them has been freed, or attempting to write data to a variable which exceeds the memory allocated. Code in Rust is safe by default, but the language also supports unsafe code, which can be useful for interoperability or to improve performance.

Actix is top of the Techempower benchmarks on some tests

There is extensive use of unsafe code in Actix, leading to debate about what should be fixed. Kim was not always receptive to proposed changes. Most recently, developer Sergey Davidoff posted about code which "violates memory safety by handing out multiple mutable references to the same data, which can lead to, eg, a use-after-free vulnerability."

Davidoff also stated that: "I have reported the issue to the maintainers, but they have refused to investigate it," referring to a bug report which Kim deleted.

Debate on this matter on the Reddit Rust forum became heated and personal, the key issue being not so much the existence of real or potential vulnerabilities, but Kim's habit of ignoring or deleting some reports. Kim decided to quit. On January 17th, he posted an "Actix project postmortem", defending his position and complaining about the community response.

"Be[ing] a maintainer of large open source project is not a fun task. You['re] alway[s] face[d] with rude[ness] and hate, everyone knows better how to build software, nobody wants to do homework and read docs and think a bit and very few provide any help. … You could notice after each unsafe shitstorm, i started to spend less and less time with the community. … Nowadays supporting actix project is not fun, and be[ing] part of rust community is not fun as well. I am done with open source."

Kim said that he did not ignore or delete issues arbitrarily, but only because he felt he had a better or more creative solution than the one proposed – while also acknowledging that the "removing issue was a stupid idea." He also threatened to "make [Actix] repos private and then delete them."

Over on the official Actix forum, he said he was "highly sceptical about fork viability" perhaps because, at least according to him, "no one showed any sign of project architecture understanding."

So long, and good luck

Since then, matters have improved. The Github repository was restored and Kim said:

I realized, a lot of people depend on actix. And it would be unfair to just delete repos. I promote @JohnTitor to project leader. He did very good job helping me for the last year. I hope new community of developers emerge. And good luck!

In addition, Kim has started winning support from many community members, as evidenced by a letter with over 100 signatories thanking him and stating: "We are extremely disappointed at the level of abuse directed towards you."

The episode demonstrates that expert developers are often not expert in managing the human relations aspect of projects that can become significant. It also shows how some contributors and users do not practice best behaviour in online interactions, forgetting the extent of the work done by volunteers and for which, it's worth noting, they have paid nothing.

Positive recent developments may mean that Actix development continues, that bugs and security vulnerabilities are fixed, and that its community gets a better handle on how to proceed constructively. ®