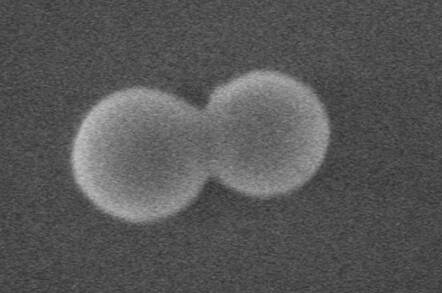 That's it ... The silica nanoparticles

The fastest spinning object on Earth – a pair of nanoparticles – can complete over five billion revolutions per second in the laboratory, according to a paper published in Nature Nanotechnology on Monday.

Here's how the team at Purdue University in the US pulled it off: they formed a dumbbell-shaped object roughly 300nm across in a vacuum chamber from two silica particles. Next, the eggheads zapped the dumbbell with a laser to trap it in place, a process dubbed optical levitation.

A second, slightly less powerful laser beam is focused on the particle to make it spin. The laser light used to trap the nano-dumbbell is passed through a lens and projected onto a series of photodetectors. As the teeny object spins, it alters the polarization of the beam, and that change is used to determine the nanoparticle's record-breaking rotation rate. Thus, the dumbbell also acts as torque detector, we're told.

Calculations revealed the silica nanoparticles were spinning at a frequency of about 5GHz, or an an eye-popping 300 billion revolutions per minute. If you need to wrap your head around, the uni, er, helpfully points out that's about half a million times faster than a typical dental drill.

“It's always exciting to set a world's record," said Tongcang Li, an assistant professor of physics and astronomy, and of electrical and computer engineering at Purdue, who led the study. Li knows that his team has set a new record because he was also part of the team that held the previous record of spinning a nanoparticle at 60 billion revolutions per minute.

That’s still faster than the fastest revolving object discovered in space yet: a pulsar that rotates at 42,960 revolutions per minute.

The goal isn’t to keep breaking records for the sake of it, however. Li hopes these strange nanoparticles will help scientists understand so-called “vacuum friction,” a quantum effect in which a particle is slowed down by frictional forces in empty space. Physicists reckon virtual photons pop in and out of existence in a vacuum, such as space, to exert a tiny amount of drag on real particles.